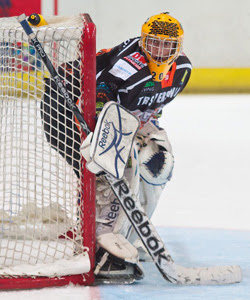 Sheffield Spartans have added another four players to their roster ahead of the new NIHL North season. Netminder Brandon Stones (left) has joined from the EPL’s Telford Tigers, while Andy Cook, Dave Pyatt and Brad Day have all agreed another year with the club.

Whitley Warriors have confirmed Nathan Ryder has agreed a sixth season at Hillheads. Joining Ryder will be netminders Joe Harley and Mark Turnbull who act as back-up to Richie Lawson. C2C understands Dave Meikle has agreed a tenth season with Blackburn Hawks.

Telford Titans agitator Owen Bennett has stepped up to the EPL with the Tigers. Trafford Metros have re-signed Max Drakeley, while Czech forward Lukas Zeman could also be on his way to Altrincham.

Solihull Barons have completed the signing of Ed Eaton from the Titans, while Perry Doyle has agreed another season. Mike Jones has left the Titans to join Deeside Dragons, while Sheffield Ice Hockey Academy graduates Luke Smith, Luke Unwin and Tom Proctor are all confirmed to Sheffield Senators roster. Coventry netminder Chris Gill has agreed a third season with Blaze.

London Raiders have snapped up Dwayne Newman from MK Thunder, while Lithuanian import Andrius Kaminskas is back for another year. Chelmsford Chieftains have re-signed Ross Brears and Darren Brown, while Yousif Abu Saada switches from Swindon Wildcats to Wightlink Raiders.