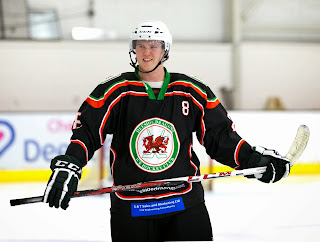 Deeside Dragons’ Swedish forward Dan Söderberg-Andersson has made a huge impact on NIHL North since his arrival in the UK a few months ago.

Currently averaging over three points a game, the Swede has been the spark which has seen the Dragons sweep to the top of the Laidler Conference.

Coast to Coast caught up with Dan after Dragons’ recent victory over Nottingham Lions to find out more about his journey to the North Wales outfit.

C2C – How did you first get into hockey?

DSA – My older brother played hockey so I was always at the rink and as I was from a smaller town there was always ice available to allow us to play.

C2C – You ended up in the GMHL in Canada – how did that come about?

DSA – When I finished school I felt like I wanted to try something new and the opportunity to go there and play came up. I went over with another friend from Sweden, We didn’t really know anything about the league – we just saw it as something fun to try.

C2C – Tell us about the teams you played for and the league – how does it compare to the UK?

DSA – The first year I played for Tamworth Cyclones who were new to the league, so we were always battling quite far down the table, but we managed to get the last play-off spot. It was a good year for me personally, so the next year I was traded to South Muskoka Shield and we ended up going all the way and won it. We had a really solid team with four strong lines and a good group of guys. My final year we lost in game seven in the finals which was tough.

The hockey is very different in North America compared to Europe. A lot has to do with the smaller ice surface – you don’t have that much time with the puck and it’ s a lot more straight to the net – dump and chase with lots of shots. Here in Europe it’s more systems and more room for puck-handling and trying to use the big ice.

C2C – Apart from hockey, why have you come to the UK?

DSA – I’ve been close to coming here to play before and it finally happened. It’s really just to try to see how it is here, meet new people and get new experiences.

C2C – How are you settling in at Deeside?

DSA – I really like it so far. Everyone has been nice and the guys on the team and the people around the team do everything for me to feel at home here, so its been great.

C2C – How do you relax away from hockey?

DSA -I like to hang out with friends and I’m really into a lot of sports so I end up watching a lot on TV or on my laptop.

C2C – Who is your hockey idol?

DSA – I don’t have an idol as such, I just enjoy good hockey, but there’s always players you think are really good such as Crosby and Ovechkin.

C2C – What are your personal ambitions in hockey?

DSA – This year was about being healthy since struggling with injuries in the past two seasons. I just want to play a full season and hopefully do well and see what comes up after that. Right now my main focus is the Dragons.

C2C – Deeside have made an impressive start to the season – do you think you can claim some silverware?

DSA – Yes I think we have a really good chance at winning the league this year. We have beaten all the other teams and we feel there’s no-one we can’t beat, especially at home. If we can stay unbeaten on our own ice and play well on the road, I don’t see why we shouldn’t finish top. But it will be tough with good teams like Solihull and Coventry chasing us.

C2C – You seem to have struck up an understanding with quite a few players on the ice – who’s impressed you most and why?

DSA – I’ve played with Shaun Kippin and James Parsons most of the season and it’s been working great. Both are smart hockey players who are easy to play with and I think we compliment each other very well. On defence I have to say our captain Marc Lovell – he never has a bad game and always seems to do everything right. Then there’s our young goalie George Cox who’s played great for us.