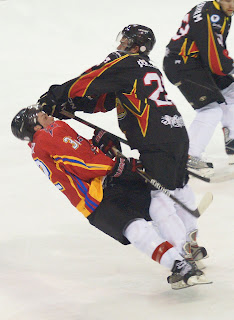 Billingham Stars made a triumphant return to the ENL North with a 4-3 victory over Blackburn Hawks. Richie Thornton set Stars on their way with a goal after just twelve seconds and further strikes from Adam Robinson, Ben Davison and Anthony Price secured the points in front of a bumper crowd at Blackburn Arena.

Trafford Metros began their campaign with a pair of victories over Nottingham Lions and Solihull Barons. Metros iced two players from Manchester Phoenix EPL team in the shape of Ciaran Long and Josh Ward and the move paid dividends as both hit the target in a 5-3 home win over the Lions. Long completed a successful weekend by grabbing a hat-trick as the Metros won 7-2 in Solihull.

Nottingham recovered from their defeat in Altrincham as they overcame Sheffield Spartans 5-3. The Lions trailed 3-2 at the end of the second period but hit three unanswered goals in the third to notch their first points of the season. Lions’ Chris Colegate led the scoring with a hat-trick.

The Northern Cup swung into action with new-boys Solway Sharks facing ENL champions Whitley Warriors in a double-header. Sharks stunned the Warriors with a thumping 7-1 win at Dumfries Ice Bowl – former Warriors Adam Reynolds (2) and Nathan Salem both got on the score sheet. Whitley gained revenge on home ice edging home 4-3 with Callum Watson bagging a couple for the Warriors.

Elite League champions Sheffield Steelers started the defence of their crown with a 2-1 overtime win over Belfast Giants. The only other fixture saw Nottingham Panthers cruise past Cardiff Devils 6-1 – David-Alexandre Beauregard hit a hat-trick.