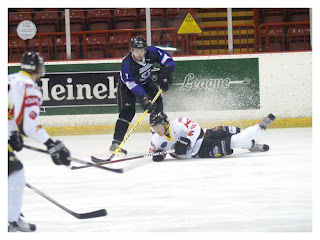 Billingham Stars returned to winning ways in ENL1 North with a 7-1 win at Nottingham Lions – Adam Robinson scored twice for Stars. Whitley Warriors remain second after beating Telford Titans 5-1, while Trafford Metros move back into third following a 3-0 win at Blackburn Hawks. Sheffield Spartans fill the final play-off position after slumping to a 7-2 win at home to Hawks – Brian Worrall and Aaron Davies both hit two for the visitors.

Solihull Barons grabbed a thrilling 7-5 derby win over Coventry Blaze. Barons trailed 2-0 at the end of the first, but roared back in the second to tie the game at 3-3. They took control in the third to run out deserving winners. Two goals from Michael Rose helped Nottingham to a 3-2 win at Telford.

Sutton Sting’s ENL2 promotion hopes were dealt a blow as they fell to a shock 4-3 loss at Hull Stingrays. Bradford Bulldogs drew 6-6 with Sheffield Senators and made it a three point weekend with a 7-1 win over Lancashire Raptors.

Romford Raiders closed the gap on Chelmsford Chieftains at the top of ENL1 South to one point after a pair of wins. JJ McGrath (4) and Danny Marshall (3) led the way as they disposed of MK Thunder 11-1, and two Juraj Huska strikes helped them to a 6-4 win at Invicta Dynamos. Chieftains’ Player/Coach Gary Clarke scored twice in a 5-0 win at Streatham Redskins. 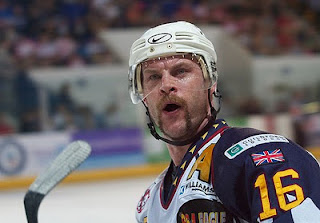 Guildford Flames’ Nathan Rempel (right) grabbed a couple as the EPL leaders won 5-3 at Swindon Wildcats and was also among the scorers in their 5-0 win over Bracknell Bees. Slough Jets stay second after a pair of wins over Sheffield Steelers – Joe Greener bagged a hat-trick in their 5-3 home success and the only goal in the return at Sheffield. MK Lightning are up to third following a 3-2 shoot-out win over Peterborough Phantoms and a 4-1 victory at Telford Tigers.

Martin Cingel scored twice for Manchester Phoenix as they won 6-2 at Bracknell, but their inconsistent form continued as they fell 4-3 at home to Basingstoke – Viktor Kubenko struck twice for Bison. Telford recovered from 5-2 down at Basingstoke to win 6-5 after a shoot-out, while Aaron Nell hit four as Swindon thumped Peterborough 8-1.

Belfast Giants remain top of the Elite League after wins over Hull Stingrays (5-1) and Cardiff Devils (4-2). Nottingham Panthers are second after a 4-3 win in overtime against Cardiff and a 5-4 success against Dundee Stars. Sheffield Steelers stayed in the title mix after beating Cardiff 4-2 and Hull 3-2 in overtime.