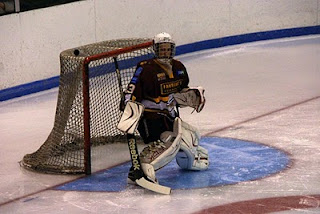 The race to join Whitley Warriors in the ENL Division One North play-offs is hotting up with five teams battling for the final three slots. Sheffield Spartans’ wins over Blackburn Hawks (5-2) and Northern Stars (9-3) puts them a point ahead of Coventry Blaze and Nottingham Lions. Blaze became only the second team to take a point off the Warriors with a hard fought 0-0 draw but surprisingly lost 5-4 to Trafford Metros. The Lions won 5-3 on the road against the Hawks who gained their revenge in Nottingham with a 6-4 success. Northern Stars’ 5-4 win against Telford Titans leaves them three points behind the final play-off slot with the Hawks two points further back.

Solihull Barons beat Bradford Bulldogs twice to open up an eleven point gap over Kingston Jets at the top of Division Two. The Barons will clinch promotion if they beat the Jets in their next game.

Fife Flyers and Whitley Warriors are locked together at the top of the Northern League. Fife kept their unbeaten record intact with a 6-3 win over Northern Stars while an inspired performance from netminder James Flavell (above) helped the Warriors triumph 5-4 at Solway Sharks. Sheffield Spartans also beat the Sharks (3-2) effectively ending their hopes of retaining the title.

Manchester Phoenix hold a six point lead over Guildford Flames in the English Premier League. Tom Duggan hit an overtime winner for Phoenix against Basingstoke Bison and followed up with a hat-trick in a 6-1 victory over Bracknell Bees. Marcus Kristoffersson also bagged three as Phoenix trounced Slough Jets 5-1. Guildford beat MK Lightning (6-3) and Basingstoke (5-3) but slumped to a 6-3 loss to Peterborough Phantoms. Steve Moria celebrated his fiftieth birthday with a hat-trick for third placed Basingstoke in their 5-3 win over Sheffield Steeldogs. Slough Jets stay fourth following wins over Bracknell (6-3) and MK Lightning (7-4) although a 4-3 loss to Telford Tigers looks to have ended their faint title hopes. MK Lightning are fifth after wins over Bracknell (7-3) and a shoot-out win over Basingstoke (3-2).

Sheffield Steelers notched their tenth straight win to open up a three point gap over Cardiff Devils in the Elite League. Ben Simon’s men beat Coventry Blaze 4-1 while the Devils slumped to a 4-0 loss to third placed Belfast Giants. Struggling Newcastle Vipers stunned Nottingham Panthers as they recovered from 4-1 down to register a remarkable 6-5 win.