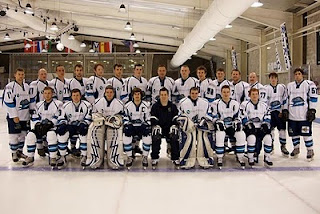 English National League champions, Whitley Warriors, began the defence of their crown with a comfortable success over Trafford Metros. Two second period goals from Adam Reynolds and Ryan Sample were scant reward for a dominant performance. Northern Stars’ first game back in the top division proved to be a rude awakening as Nottingham Lions visited the North East. Daniel Taylor’s first senior hat-trick helped the Lions to a resounding 7-1 win.

Flintshire Freeze and Solihull Barons are favourites to battle for promotion from Division Two and both started their campaigns with victories. Two goals from Chris Jones and a Marc Lovell strike were enough to give Freeze a 3-1 victory over Lancashire Raptors. The Barons travelled to Yorkshire to face Sheffield Senators and hit twelve unanswered goals. Rob Eley hit five while Richard Slater grabbed a couple.

Last season’s Northern League winners, Solway Sharks (pictured above), started in style with a comfortable win at Northern Stars. Import Pavol Melicherik continued where he left off last term with a hat-trick as the Sharks notched a 6-3 victory. Flintshire Freeze stunned Blackburn Hawks with a hard fought 3-2 success. James Parsons (2) and Chris Jones scored for Freeze with Jared Owen and Sean Day replying for the Hawks. The only other game played saw Sheffield Spartans travel to Bradford to face the Bulldogs. In a one-sided encounter Sheffield cruised to a 7-2 win.

Nottingham Panthers made an impressive opening to their Elite League season by defeating last season’s top two. A 4-3 shoot-out victory over Belfast Giants was followed by a startling 7-4 win against Coventry Blaze. Sheffield Steelers also made a perfect start with victories over Cardiff Devils (5-1) and Elite League newcomers Dundee Stars (6-0). The final game of the weekend saw the Giants triumph 4-3 over the Devils.