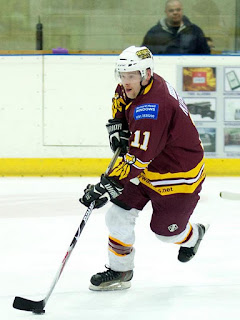 Billingham Stars have extended their lead at the top of ENL1 North. Goals from Alex Lawson and James Udell helped them to a 2-1 win at Trafford Metros and they followed up with a 4-1 home success over Coventry Blaze. Reigning champions Whitley Warriors are now second. Following a 4-1 loss at Blackburn they recovered to defeat the Hawks 4-2 on home ice – Shaun Kippin (left) scored twice. Former Newcastle Vipers netminder Richie Lawson made his debut as Warriors travelled to face Nottingham Lions and helped them to a 4-3 win.

Sheffield Spartans continued their recent good form with a 5-2 win at Telford Titans – Nick Manning and Ollie Barron both scored a couple. Titans bounced back with a 6-4 win at Coventry Blaze with Adam Taylor and Paul Rigby each getting a pair. Two goals from Joe Wightman helped Nottingham to a 6-2 win over Solihull Barons. 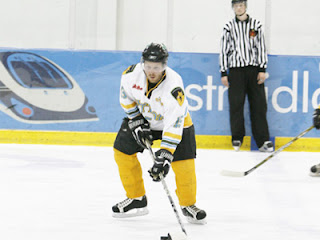 Sutton also crushed Bradford with Ben Lowe (4), Simon Butterworth (3), and Shaun Ashton (3) amongst the goals. Flintshire recovered from the loss to Sting with a 6-3 win over Fylde Flyers – James Parsons scored three. Lancashire Raptors remain pointless after defeats to Bradford (5-1) and Sheffield Senators (7-0).

Billingham bagged their first win in the Northern Cup with a 7-4 success over Blackburn Hawks. In the Southern section, Invicta Dynamos’ Andy Smith reached 700 points for the club with a hat-trick in their 8-4 win over Wightlink Raiders and two in a 3-2 victory over Chelmsford Chieftains.

Chelmsford remain top of ENL1 South. They followed up an 8-2 road success over Bristol Pitbulls with a 4-2 home win over title rivals Romford Raiders – player-coach Gary Clarke scored three. Raiders’ Juraj Huska has been in fine scoring form, hitting two in 6-3 wins over Cardiff Devils and Wightlink and three as they beat Slough Jets 7-6. Wightlink disposed of Slough (8-3) and Invicta (3-2) to stay firmly in the hunt.

Slough Jets have moved to the top of the EPL. Tom Carlon scored three as they beat Telford Tigers 6-3 and Adam Calder repeated the feat in 10-4 success at Peterborough Phantoms. Carlon and Darius Pliskauskas each grabbed a couple in a 7-3 win at Swindon Wildcats but the Jets suffered a shock 3-0 loss in the reverse fixture on home ice.

Guildford Flames are second despite some mixed results. They beat Manchester Phoenix 5-3 but fell to Sheffield Steeldogs 3-2 with Andre Payette bagging the shoot-out winner. Nathan Rempel’s brace helped Flames gain revenge in a 4-3 win over the Steeldogs but their inconsistency continued as they fell 6-4 to MK Lightning. Player/coach Paul Dixon settled the return fixture with the decider in a 4-3 shoot-out win.

Lightning have dropped to third after losing to Peterborough (4-1) and Bracknell Bees (4-3) while Sheffield are fourth following a 3-2 home loss to Phoenix and a 7-5 win at Telford – Janis Ozolins hit a hat-trick. Defending champions Manchester have also struggled for consistency as they thumped Basingstoke Bison 5-2 but lost the return fixture on home ice 3-0.

Bison’s Viktor Kubenko scored three as they beat Swindon 5-2 while Joe Miller’s overtime strike sealed a 4-3 win over Peterborough. Telford’s Juraj Senko hit shoot-out winners at home to Swindon and away to Bracknell while Lukas Smital scored three as the bees routed Peterborough 8-5. Swindon’s clash with local rivals Bracknell was a hard fought affair which the Wildcats edged 3-2.
Belfast Giants are still top of the Elite League. They followed a 3-2 success over Nottingham Panthers with a 3-2 win at Hull Stingrays but a 4-1 defeat at Braehead Clan and a 4-3 shoot-out loss to Coventry Blaze means the lead is down to four points.

Sheffield Steelers are second after wins over Dundee Stars (8-5), Coventry (2-0) and Edinburgh Capitals (6-1) while Nottingham are third. The Panthers lost 3-1 to Cardiff Devils but a 6-0 win over Dundee and a 3-2 shoot-out success against Fife Flyers keeps them in touch.