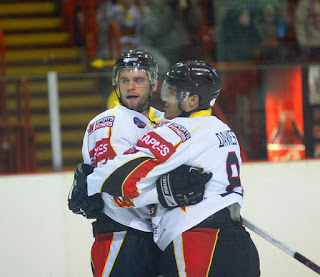 Billingham Stars have moved nine points clear at the top of ENL1 North after beating Nottingham Lions 4-2. Whitley Warriors lost 6-2 at Trafford – Jake Nurse scored three for the Metros. Telford Titans strengthened their play-off hopes with a comfortable 11-3 win over Blackburn Hawks – Chris Jones grabbed four – and a 10-3 success at Solihull Barons. Tom King (left) scored twice for Blackburn as they recovered from their hammering at Telford by beating Coventry 3-1. Blaze had eased their relegation worries the previous day by beating Trafford 3-0.

Sutton Sting kept up their promotion challenge with a pair of wins over Fylde Flyers. They edged a tight contest at Cleveleys Ice Rink 6-5 and completed a weekend double winning 7-3 on home ice. Flintshire Freeze stay in second place after beating Sheffield Senators 6-5, but a 2-2 draw at home to Hull Stingrays means Sutton are now favourites to clinch second place behind Solway Sharks.

Solway moved a step closer to clinching their first ENL silverware with a 4-1 win at home to Billingham. Paul Windrindge put Stars ahead, but goals from Bob Chalmers, Adam Reynolds, Struan Tonnar and Nathan Salem secured a hard fought victory. 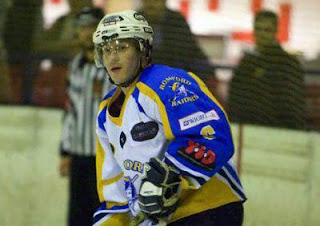 Romford Raiders remain top of ENL1 South after two wins over Streatham Redskins. Two goals from Danny Marshall (right) helped Raiders to a 6-4 road success and Matt Turner grabbed four in a 7-4 home win. Chelmsford Chieftains won 7-4 at Bristol Bulldogs and by the same score in the reverse fixture to stay second. Wightlink Raiders are third after a 7-4 win over Invicta Dynamos.

MK Lightning are now just one point behind Guildford Flames at the top of the EPL. Flames fell to a shock 6-4 defeat at Swindon Wildcats and Lightning took full advantage, recovering from two down to win 7-2 at home to Telford Tigers – Leigh Jamieson and Nick Poole both scored twice. Jamieson repeated the feat as Lightning came from behind again to win 5-3 at Bracknell Bees.

Third placed Slough Jets suffered a miserable weekend as they slumped to a 4-2 defeat at home to Manchester Phoenix and by the same score at Sheffield Steeldogs. Phoenix are now level on points with Slough after winning 8-5 at Telford – Martin Cingel, Jaroslav Spelda and Juraj Faith all scored twice for the visitors. Sheffield are fifth after easing past Peterborough Phantoms 2-0, while sixth placed Basingstoke Bison grabbed a pair of wins over Bracknell (7-4) and Peterborough (5-2).

Sheffield Steelers are closing in on the leaders in the Elite League. A trio of road wins over Coventry Blaze (4-1), Fife Flyers (2-1) and Edinburgh Capitals (4-3) sees them seven points behind Belfast Giants with five games in hand. Giants beat Dundee Stars 6-2 to stay three points clear of Nottingham. The Panthers surprisingly lost 4-2 at home to Cardiff devils but bounced back to win the reverse fixture 4-1.