ENL1 North leaders Billingham Stars comfortably disposed of Solihull Barons 8-0 to stay top of the pile. James Udell and Scott Ward set Stars on their way with goals in the first five minutes. Simon Hehir, Andy Flecther, Stuart Gibbon and a second strike from Ward extended the lead in the second, while final period goals from Gibbon and James McCabe completed the rout. Trafford Metros are level on points with Billingham after a 4-0 away win over third placed Telford Titans. 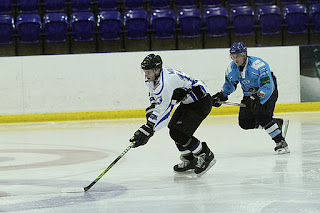 Coventry Blaze continued their unpredictable form with a win and a loss. They followed a 7-3 success over Whitley Warriors with a 6-2 defeat in Sheffield – Shaun Wild (left) scored twice for Spartans.

The Warriors’ quest for a third title on the spin suffered a further setback as they could only draw 3-3 at home to Nottingham Lions. Jordan Barnes gave them the lead but Gareth O’Flaherty and Joe Wightman put the visitors in front by the end of the first period. Wightman added another in the second, but goals in the third by DJ Good and Jamie Tinsley salvaged a point for Whitley.

Solway Sharks remain top of ENL2 North after an 18-6 demolition of Fylde Flyers. Goals from Aiden Fulton (2), Bob Chalmers (2), Calum Henderson and Ross Murray gave Sharks a 6-2 lead at the end of the first – Elvis Veldze grabbed both for Fylde.

Veldze completed his hat-trick in the 33rd minute, but Murray restored Sharks’ four goal cushion soon after. Flyers hit back through Veldze and Richard Hulme to close the gap to two. Solway ran riot in the final period as Chalmers completed his hat-trick while Adam Reynolds (4), Struan Tonner, Frazer Goldie, Nathan Salem, Lewis Gold and Mark Gallagher were all on target. Flyers only reply was Veldze’s fifth of the night which secured him the MVP award.

Flintshire’s Chris Jones scored three as Freeze beat Lancashire Raptors 7-0 and he repeated the feat in their 8-5 win over Sheffield Senators. The all-Yorkshire clash between Bradford Bulldogs and Hull Stingrays saw the Humbersiders triumph 8-4. 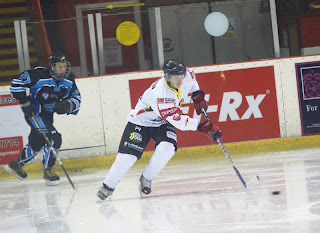 Solway extended their lead in the ENL North Cup with a 6-2 win over Blackburn Hawks in front of a big crowd at Blackburn Arena. After a scoreless first period the game burst into life in the second as Adam Reynolds and Nathan Salem put the Sharks in front. Rick Hughes pulled one back for Hawks, but Lewis Gold restored the two goal cushion moments later. Solway pulled away in the third with Salem and Mark Gallagher making it 5-1 before Jordan Bannon (right) reduced the deficit for the home team, but Bob Chalmers raced away to score Sharks’ sixth and extinguish any hopes of a comeback.

In the Southern section, Slovakian forward Juraj Huska’s four-goal haul helped Romford beat Wightlink 6-4 in the battle of the Raiders at Ryde Arena. Wightlink led 3-1 at the end of the first but Romford battled back to remain unbeaten in the group.

Manchester Phoenix are the new leaders in the EPL. Juraj Faith scored twice as they beat Peterborough Phantoms 5-0 in Altrincham. The Slovakian then opened the scoring for Phoenix away to Telford Tigers but Joe Henry equalised and the game went to overtime where the teams still couldn’t be separated. Faith scored again in the shoot-out but Marek Hornak and Juraj Senko gave Tigers the win.

Sheffield Steeldogs are second after a 3-0 loss to Guildford Flames and a 4-2 win over Basingstoke Bison – Janis Ozolins scored a couple for the Dogs. Bison also lost at home to Slough Jets. The teams finished 2-2 at the end of the first before Bison raced into a 6-3 lead during the second. Jets clawed their way back to 6-5 at the end of the period and went on to secure the points with two unanswered goals in the third. Marcel Petran hit three for Bison while Adam Calder did the same for the Jets.

MK Lightning had a pair of wins over Telford (3-0) and Slough (3-1) while Bracknell Bees and Swindon Wildcats notched 1-0 road wins over each other. Peterborough’s Maris Zeidins hit a hat-trick as the Phantoms beat the Flames 6-4 to secure their first points of the season.

Belfast Giants have opened up a three point lead over Sheffield Steelers and Nottingham Panthers at the top of the Elite League. They followed up a 4-3 win at Hull Stingrays with an impressive 5-2 success at Coventry Blaze – George Awada bagged a hat-trick. Steelers’ won 3-2 after a shoot-out against Cardiff Devils while Nottingham Panthers comfortably beat Edinburgh Capitals (7-3) and Braehead Clan (3-0). Dundee Stars gained their first win of the season beating Hull 3-1 while Fife Flyers’ woes continued with a 4-2 loss against Cardiff.