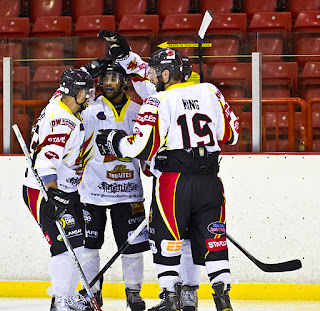 Billingham Stars still lead the way in ENL1 North. Michael Elder scored twice for Stars as they beat Trafford Metros 4-1. Whitley Warriors are second after a 7-0 win over Nottingham Lions – DJ Good (2), Callum Watson (2), Dean Holland (2) and Nathan Ryder scored the goals. Blackburn Hawks moved into the play-off places with an emphatic 8-0 win over Telford Titans – Sami Narkia grabbed a hat-trick for the Hawks. Solihull Barons boosted their hopes of avoiding the drop with a 6-3 win over Sheffield Spartans – Erik Bakalar scored a couple for Barons.

Solway Sharks made it 15 ENL2 wins in a row with an 8-3 success over Hull Stingrays. Nathan Salem (4) and Adam Reynolds (2) led the way for Sharks who look title certainties. Sutton Sting are up to second after beating promotion rivals Flintshire Freeze 9-2 – Simon Butterworth and Shaun Ashton both scored two for Sting. Elvis Veldze hit four as Fylde Flyers beat Bradford Bulldogs 9-4, while Lancashire Raptors are still seeking their first points of the season after losing 7-0 to Sheffield Senators. 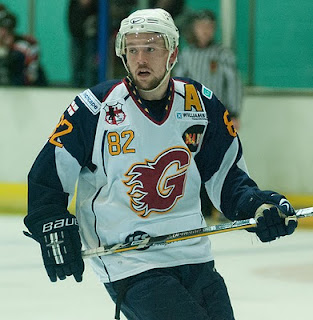 Guildford Flames grabbed a pair of road wins to open up a two-point lead over Slough Jets at the top of the EPL. Jez Lundin’s (right) last minute empty-netter crowned a 5-3 win at Manchester Phoenix, while Branislav Kvetan notched the shoot-out winner as they beat Sheffield Steeldogs 5-4. Slough split a weekend double-header with third placed MK Lightning, winning 3-1 on home ice but falling 5-2 in the reverse fixture.

Sheffield Steelers grabbed two vital overtime wins to crank up the pressure at the top of the Elite League. They beat leaders Belfast Giants 2-1 and followed up with a 4-3 win over Braehead Clan. Giants recovered to beat Fife Flyers 3-1 while Nottingham Panthers 6-2 win over Edinburgh Capitals keeps them second – a point ahead of Sheffield.