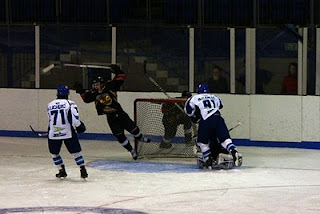 Whitley Warriors’ dominance of English National League Division One North continued with a pair of wins over Sheffield Spartans. They followed a 6-3 road win with a 5-1 success on home ice and now hold a twelve point lead over Coventry Blaze. A Rhys McWilliams hat-trick helped Blaze see off Telford Titans 4-2, but a play-off slot seems the best they can hope for.

Solihull Barons still lead the way in Division Two. Dean Tonks hit five as the Barons smashed eleven past Lancashire Raptors while Rob Perks grabbed a couple during their 5-3 win over Sutton Sting. Kingston Jets beat Bradford Bulldogs 9-5 to close the gap on Flintshire Freeze in second place to a single point.

Blackburn Hawks caused the shock of the season in the Northern League by defeating Solway Sharks 5-4 in Dumfries. The Hawks’ Scottish double header had started with a thumping 13-3 loss to leaders Fife Flyers and the Sharks were expected to dish out similar treatment. Despite a short bench the Hawks produced a tenacious display and their efforts were rewarded as they recovered from 4-3 down to snatch the points – Chris Arnone (above) bagging the winner with just 24 seconds left on the clock. Whitley’s wins over Sheffield coupled with an 11-3 success over Flintshire moves them into second place.

Manchester Phoenix have returned to the top of the English Premier League. Despite losing a shoot-out to Slough Jets (2-1), Phoenix toppled nearest rivals Guildford Flames 4-3 to add to comfortable victories over Bracknell Bees (6-0) and Telford Tigers (9-2). The Flames beat Peterborough Phantoms twice (5-2 & 7-3) and recovered from a 2-1 down to beat Swindon Wildcats 3-2 to sit just a point behind Phoenix. Basingstoke Bison made it eleven wins in a row to move into third place with a 3-2 win over Slough. Steve Moria’s men have been on a tremendous run of late with Slovakian forward Viktor Kubenko in unstoppable form. Slough have slipped to fourth place while MK Lightning stay fifth.

Belfast Giants hold a five point lead over Nottingham Panthers at the top of the Elite League. Despite splitting the points with Edinburgh Capitals in a double header, the Giants have seen the Panthers struggle – winning just one of their last four matches. Cardiff Devils have leapfrogged Sheffield Steelers into third place while Coventry Blaze suffered a third straight loss as their hopes of retaining their title fade.