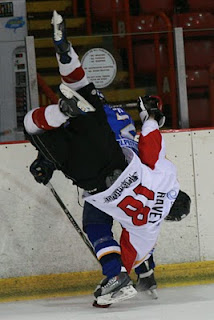 The result means the Raiders are now eight points clear at the top of ENL Division One South and have stretched their impressive unbeaten run to 18 games.

The race for the Division One North play-offs is hotting up. Blackburn Hawks beat Sheffield Spartans 5-0 to strengthen their claims while Coventry Blaze overcame Northern Stars 7-1. Nottingham Lions’ hopes suffered a setback losing 8-2 to Whitley Warriors.

Solihull Barons clinched promotion to Division One with a 14-4 win at Kingston Jets. Dean Tonks (4) and Richard Slater (3) led the scorers for the Barons who have dropped just one point all season.

Fife Flyers are firm favourites to win the Northern League following their 4-1 win over Whitley Warriors. The Flyers also beat Blackburn Hawks 5-2 (action above) to open up a four point gap over the Warriors with two games in hand. Solway Sharks’ poor form continued as they could only manage a 4-4 draw at home to lowly Northern Stars.

Slough Jets boosted their English Premier League title hopes with victories over the top two. Adam Calder grabbed a pair during their 4-2 win over Manchester Phoenix and repeated the feat as the Jets triumphed 6-5 at Guildford Flames. Phoenix remain top courtesy of a 5-4 win over MK Lightning with Curtis Huppe grabbing a couple. The Flames stay second after their 4-2 win over Lightning – Nathan Rempel bagged a hat-trick. Basingstoke Bison beat Swindon Wildcats (4-2) and Telford Tigers (8-5) to remain in contention.

Four unanswered third period goals helped Slough Jets record an impressive 8-4 victory over Guildford Flames in the first-leg of their Premier Cup semi-final at The Hangar. Calder again led the scoring with his first hat-trick for the Jets.

Elite League leaders Sheffield Steelers saw their 11-game winning run brought to an end by Nottingham Panthers. Goals from Joey Talbot, Jeff Legue and Ben Simon had given Sheffield a 3-1 lead by the early stages of the third period, with Nottingham’s reply coming from Billy Ryan.

The Panthers drew level with strikes from Rob Bellamy and David-Alexandre Beauregard before winning the shoot-out to take the match 4-3.