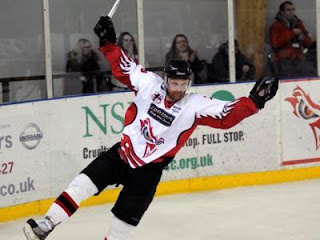 Wightlink Raiders need one more point to be crowned English National League Division One South champions. Player-coach Jeremy Cornish (left) grabbed a hat-trick as the Raiders thumped Swindon Wildcats 11-1. The Raiders play Cardiff Devils ENL in their final fixture as they look to claim their first title in 14 years.

Fife Flyers have completed the Northern League title and play-offs double. A 7-2 win over Blackburn secured the league crown with Whitley finishing runners-up. The play-off weekend in Kirkcaldy saw the Flyers beat Sheffield 8-1 and Whitley overcome Solway Sharks 8-4 in the semi-finals. The final was a one-sided affair with Fife running out comfortable 6-0 winners.

The battle to be crowned Elite League champions is going down to the wire. Sheffield Steelers and Cardiff Devils are locked on 83 points with Belfast Giants a point behind. The Steelers face Braehead Clan twice while Cardiff host reigning champions Coventry Blaze before travelling to face Edinburgh Capitals. Belfast have tough trips to Nottingham Panthers and Coventry on a potentially dramatic final weekend.