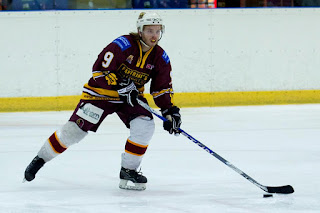 Billingham Stars roared to a 7-1 win at Nottingham Lions to stay top of ENL1 North. Alex Lawson (2), Andy Finn, Mick Elder, Paul Windridge, Simon Hehir and Andy Fletcher did the damage for Stars who are still unbeaten in the league. Whitley Warriors remain second after beating Telford Titans 5-1 – DJ Good (left) was among the scorers – while Trafford Metros are third after easing past Coventry Blaze 4-2.

Blackburn Hawks beat Solihull Barons 8-2 with Rick Hughes and new Finnish import Sami Narkia both scoring twice, while Sheffield Spartans fell to a shock defeat at home to Nottingham. Will Barron and Jon Woolhouse gave them an early lead but Gareth O’Flaherty and Joe Wightman levelled things before the end of the first. Shaun Wild and Nathan Britton put Spartans back in front but Lions fought back with Mark Corfield, Ben Wood, Ciaran Quinn and Danny Rose completing an unlikely turn around.

Solway Sharks made it 12 ENL2 wins on the spin with an 8-1 win over Hull Stingrays. Top scorer Adam Reynolds hit three for Sharks who look firm favourites to gain promotion. Sutton Sting moved into second after demolishing Lancashire Raptors 15-0 with the prolific Ben Lowe (5) and Shaun Ashton (4) among the scorers. Hull moved into fourth after beating Fylde Flyers 6-3, while Bradford Bulldogs beat Raptors 5-0 to leave the Lancastrians rooted to the foot of the table. 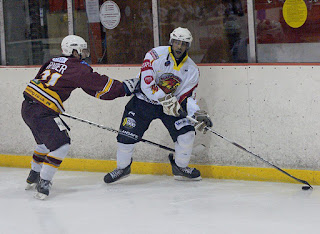 Slough Jets still lead the way in the EPL. They made it nine wins from their last ten games beating Peterborough Phantoms 6-2 and Bracknell Bees 5-4 after a penalty shoot-out – Dan Davies hit the winning goal. Sheffield Steeldogs’ Greg Wood hit a couple in a 4-1 at injury-hit Manchester Phoenix and repeated the feat during regulation against Bracknell Bees. Steeldogs had been 5-2 down at the end of the second but recovered to score three unanswered goals to send the game into overtime. With no further scoring it was left to Wood to break the deadlock with the shoot-out winner. The Yorkshire outfit failed to make it three wins for the week as they fell 5-2 to Peterborough – Luke Ferrera scored two for the Phantoms.

Guildford Flames have struggled on the road this season and lost again at Basingstoke – Joe Miller’s shoot-out strike gave Bison a 3-2 win. Flames enjoyed better luck back on home ice as hat-tricks by Curtis Huppe and Dave Longstaff helped them see off Phoenix 9-4. Martin Cingel gave Tony Hand’s men some relief with a hat-trick of his own as Telford were beaten 9-5 – a result which sent the Tigers to the foot of the table having also lost 3-2 to Bison. MK Lightning’s Blaz Emersic scored three in a 5-3 win at Swindon but Wildcats gained revenge with a 3-2 win in the reverse fixture.

Nottingham Panthers have closed the gap on Belfast Giants to two points at the top of the Elite League. Panthers edged a close contest with third placed Sheffield Steelers 1-0 and followed up with an emphatic 8-1 win at Fife Flyers. Belfast also beat Fife (6-3), but also fell to a surprise 2-1 defeat to Cardiff Devils. Coventry Blaze are fourth after a 4-3 win against Dundee Stars.