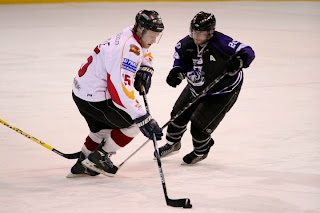 Defending champions Whitley Warriors maintained their unbeaten record in ENL Division One North with a derby victory over Northern Stars. Two goals from Daniel Good helped the Warriors to a 4-2 success. Nottingham Lions stay in second place after crushing Sheffield Spartans 8-2 while two goals by Rhys McWilliams eased third placed Coventry Blaze ENL to a 4-2 win over Blackburn Hawks. Dave Meikle (left) hit five as the Hawks got back to winning ways with a 9-0 drubbing of Trafford Metros. The defeat completed a miserable weekend for the Metros who also lost 5-2 at home to Northern Stars.

Division Two leaders Solihull Barons almost lost their unbeaten record at Flintshire. Chris Jones scored four for Freeze leaving the Barons trailing 6-3 at the end of the second period. Peter Gazda extended the lead just a minute into the third but Solihull recovered to hit four unanswered goals and tie the game at 7-7. Dean Tonks continued his remarkable scoring form with a hat-trick for the visitors. Kingston Jets’ promotion hopes suffered a blow with a surprise 4-2 home loss to Bradford Bulldogs.

Steve Moria inspired Basingstoke Bison to a four point weekend over EPL leaders Manchester Phoenix. Goals from Viktor Kubenko, Moria, Mindaugas Kieras and Ollie Bronniman gave Bison a 4-1 home win on Saturday. Phoenix looked to be heading for revenge on Sunday as they led 2-1 with under a minute remaining, but Moria stunned the Altrincham faithful to send the game into overtime. Slovakian forward Ondrej Lauko then completed the turnaround with the game winning goal coming just 53 seconds into the extra period.

Guildford Flames missed the chance to draw level with Phoenix after a mixed weekend. The Flames hit nine past Bracknell Bees on Saturday but failed to fully capitalise on Manchester’s woes by falling 2-1 to MK Lightning on home ice the following day. Adam Carr hit the vital shoot-out winner after overtime failed to separate the teams. Carr’s strike capped off a good weekend for Lightning as they also defeated Sheffield Steeldogs 7-2. Slough Jets’ victories over Telford Tigers (6-1) and the Steeldogs (3-1) ensured they stay in third place.

Belfast Giants still lead the way in the Elite League. Braehead Clan and Dundee Stars were their latest victims as they opened up a two point gap over Nottingham Panthers. Corey Neilson’s Panthers also beat the Stars but fell 3-2 to Cardiff Devils in a shoot-out. Sheffield Steelers beat Braehead 5-2 to remain in third place while Coventry Blaze stay fourth after beating Hull Stingrays 3-1.

Solway Sharks closed the gap on Fife Flyers at the top of Northern League to four points after an impressive victory over Whitley. Struan Tonnar hit four as the Sharks cruised to a 7-2 win.