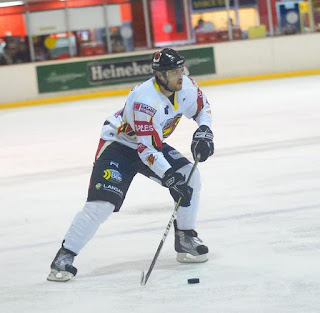 Blackburn Hawks produced a power-packed display to beat ENL1 North leaders Billingham Stars 3-1. First period goals from Rick Hughes (above), Tom King and Jared Owen set Hawks on their way as they boosted their hopes of qualifying for the play-offs. Second placed Whitley Warriors took full advantage, winning 4-3 at Coventry Blaze and 7-3 at home to Solihull Barons, to narrow the gap to five points.

Telford Titans boosted their play-off hopes beating Sheffield Spartans 7-1 and Nottingham Lions 6-3 – Chris Jones bagged a hat-trick against the Lions. Trafford Metros blew a three goal lead at home to Solihull to draw 3-3, but clung on to fourth place with a 6-4 win at Sheffield.

Solway Sharks fell to just their second defeat of the season, losing 3-2 in the Northern Cup to Blackburn. Nathan Salem gave Sharks the lead before Jordan Bannon’s hat-trick put Hawks in control. Adam Reynolds pulled one back for Solway, but missed a penalty shot to tie the game to hand Hawks the win.

Chelmsford Chieftains moved to the top of ENL1 South with a 4-1 win at title rivals Romford Raiders – Danny Hammond scored twice. Both teams went into the game on the back of wins – Romford beating Bracknell Hornets 7-0, while Chelmsford beat Slough Jets 8-3. Cardiff Devils remain fourth after a 3-0 win at home to Invicta Dynamos. Wightlink Raiders had a mixed weekend – beating Streatham Redskins 6-2 but crashing 3-2 at Slough. 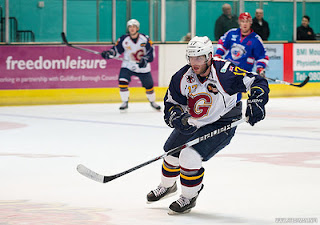 Two goals from Janis Ozolins helped Sheffield Steeldogs to a 6-1 over Bracknell Bees, but they couldn’t follow up as they slumped to a 5-2 defeat at Peterborough Phantoms. Viktor Kubenko grabbed a couple as Bison won 3-1 at Telford, while Aaron Nell and Jonas Hoog both scored two as Swindon Wildcats beat Peterborough 7-3. Bracknell beat Swindon 3-2 after overtime with Sergejs Louskins grabbing the winner.

Belfast Giants are seven points clear at the top of the Elite League after two wins over Coventry Blaze (4-3 & 5-3). Second placed Nottingham Panthers lost 3-2 at Braehead Clan while Sheffield Steelers are a further two points back after beating Dundee Stars 3-1.