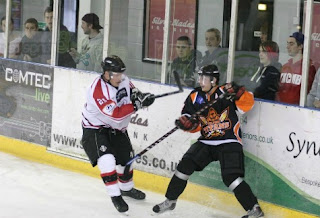 Billingham Stars are third, but had to come from behind to beat Coventry Blaze in their first game back at the newly refurbished Billingham Ice Arena. Aidan Mahmud gave the visitors an early lead but goals from James Udell and Adam Robinson keeps the Stars unbeaten.

Nottingham sit in fourth after a 4-1 win over fifth placed Coventry. Rick Hughes (below) bagged a hat-trick as Blackburn Hawks beat Solihull 7-1 while Callum Watson also hit three for Whitley as they defeated Sheffield Spartans 6-2. The Spartans are yet to register a victory as they also fell 4-0 to Coventry. 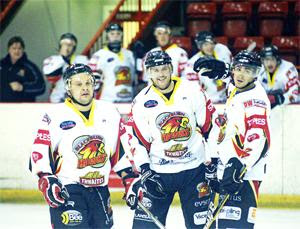 Solway Sharks lead the way in ENL2 North after winning four on the spin. The Dumfries outfit secured easy home victories against Sheffield Senators (11-0) and Bradford Bulldogs (9-1) and proved their title credentials in emphatic fashion on the road. Flintshire Freeze were thumped 16-1 with Bob Chalmers, Struan Tonner and Nathan Salem all hitting hat-tricks. Salem then grabbed four in a 20-0 rout at Lancashire Raptors with Adam Reynolds and Mark Gallagher grabbing three each. Sutton Sting also boast a 100% record following wins against Hull Stingrays (9-6), Bradford (8-5) and Flintshire (10-3) while new-boys Fylde Flyers began with a 4-0 success over the Raptors.

Wightlink Raiders began the defence of their ENL1 South crown away to Bracknell Hornets and edged a tight contest 5-3. They followed up with a 14-0 home thrashing of Streatham Redskins and an impressive 8-4 road win at Bristol Pitbulls. Romford Raiders are the only other unbeaten team following comfortable victories over Slough Jets (6-2), Bristol (7-2) and Oxford Stars (7-1). Chelmsford Chieftains recovered from their shock opening day draw with Oxford to record three wins on the bounce. A difficult trip to Cardiff Devils resulted in a thrilling 5-4 success and they followed up with resounding 8-2 victories over Bracknell and title rivals Invicta Dynamos.

Belfast Giants lead the Elite League with three teams locked together just a point behind. Unbeaten Nottingham Panthers head the chasing pack following victories over Edinburgh Captials (twice) and Fife Flyers while Coventry Blaze have also made a perfect start. Sheffield Steelers complete the trio after securing home and away wins over Cardiff Devils.