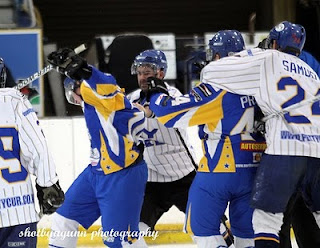 Division One South leaders Wightlink Raiders extended their winning run to twenty with wins over Bristol Pitbulls (14-3) and Cardiff Devils (4-2) but Chelmsford Chieftains, Invicta Dynamos and Romford Raiders all enjoyed unbeaten weekends and with games in hand can still challenge the islanders.

Fife Flyers (above) need one more win to clinch the Northern League title. Stephen Gunn hit three for the Flyers in their fiesty 10-2 win over Northern Stars and they recovered from 2-0 down at Solway Sharks to win 3-2 – Steven Lynch grabbing the winner in the final minute. Whitley Warriors stay second after beating Flintshire 10-1.

Manchester Phoenix forward Curtis Huppe capped a remarkable weekend with an eight goal haul. The Canadian hit a hat-trick as the EPL leaders beat Bracknell Bees 6-3 and then smashed five against Peterborough Phantoms. Despite Huppe’s heroics, Phoenix only snatched both points courtesy of Marcus Kristoffersson’s overtime winner. Guildford Flames stay six points behind Phoenix after wins over Peterborough (6-4) and Sheffield Steeldogs (5-1). Basingstoke Bison beat Sheffield 3-1 to stay third but lost 4-3 after a shoot-out to MK Lightning and are now just a point ahead of Slough Jets who beat Swindon Wildcats twice (7-0 & 6-3).

Basingstoke booked their place in the EPL Cup Final with an 8-7 aggregate win over Manchester. Phoenix looked favourites after winning the first leg 3-2 but two goals from Ondrej Lauko helped Bison to a 6-4 win in the return. They will meet either Slough or Guildford in the final – the Jets won the first leg 8-4.