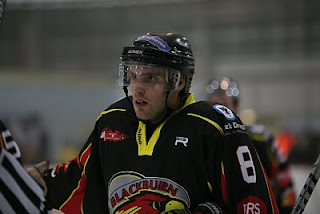 Whitley Warriors and Sheffield Spartans remain the only unbeaten teams in ENL Division One North. Both faced potentially tricky road trips but maintained their 100% percent records in differing fashion. The Warriors faced Trafford Metros and ran out comfortable 6-1 winners, with the prolific Adam Reynolds bagging a couple. Northern Stars were the Spartans’ victims with the Barron brothers, Will and Ollie, hitting a goal apiece in a gritty 3-2 victory.

Coventry Blaze ENL had enjoyed a perfect start to the season and held high hopes of continuing this at home to Blackburn Hawks. Josh Nicklin grabbed a couple for Blaze but two goals each for David Miekle and Aaron Davies (above) helped the Hawks to an impressive 7-5 scoreline. The Hawks completed a four point weekend with a 3-1 win over Trafford with ex-Metros Tom King (2) and Sean Day doing the damage. Nottingham Lions have made a slow start to the campaign and surprisingly slipped to a 5-4 reverse at Telford Titans.

Flintshire Freeze lead the way in Division Two North after another successful weekend. Marc Lovell gained an MVP in their 10-3 win at Bradford Bulldogs and the Deesiders stayed unbeaten after blasting nine past Lancashire Raptors. Solihull Barons are also yet to lose after grinding out a 4-1 win at Kingston Jets with Rob Eley scoring twice. Kingston are in third place after hitting eleven past Sheffield Senators while Lancashire Raptors regained some pride with an 18-0 demolition of Sutton Sting.

In the Southern section Oxford City Stars and Streatham Redskins are setting the early pace, closely followed by Bracknell Hornets and Invicta Dynamos.

Two Steven Lynch goals helped Fife Flyers to a stylish 3-0 win over Northern Stars in the Northern League. With Flintshire’s win over Bradford and Sheffield Spartans’ defeat of the Stars also counting towards this competition, all three teams still remain unbeaten.

Tony Hand’s Manchester Phoenix made a flying start to the new EPL season. Boasting four new imports, Phoenix travelled to Basingstoke Bison on Saturday and new Canadian forward, Curtis Huppe, made an immediate impact scoring twice in a 4-3 victory. The following day Phoenix faced last season’s play-off winners, Slough Jets, and Swedish forward Marcus Kristofferson took centre stage. He scored one and made another as the Jets were soundly beaten 3-0. Slough had enjoyed better fortune with a 4-1 success over Sheffield Steeldogs on Saturday with former Elite League star Doug Sheppard scoring two on his debut.

Guildford Flames took maximum points from their two games with victories over Bracknell Bees and Sheffield. Nathan Rempel scored two in a 6-3 win over the Bees before the Flames remarkably recovered from three down to hit seven past the stunned Steeldogs. Telford Tigers return to the EPL started with a bang after they raced into a three goal lead over Swindon Wildcats, but the Wiltshire outfit recovered in the third period scoring five with imports Toivo Suursoo and Jozef Kohut each grabbing a couple of goals.

Telford’s woes continued on Sunday against Basingstoke with Ollie Bronnimann hitting a hat-trick for the visitors in a 6-0 romp. The final game of the weekend saw Bracknell narrowly edge out Swindon 5-4.

Braehead Clan’s first ever appearance in the Elite League pitched them against fellow new-boys, Dundee Stars. Canadian forward Bobby Chaumont scored twice as the Clan secured the points with a 5-3 victory. The result leaves the Stars still searching for their first point of the season. Nottingham Panthers and Sheffield Steelers retained their perfect records with victories over Coventry Blaze and Newcastle Vipers. Panthers’ 6-4 win over Blaze means last season’s champions are still pointless after four matches. Sheffield faced a double header against the Vipers and followed up a thumping 8-0 success at the Motorpoint Arena with a 5-3 win in the North East. Belfast Giants had mixed fortunes overcoming Edinburgh Capitals 5-1 at home before succumbing 5-2 to an impressive Devils team in Cardiff.