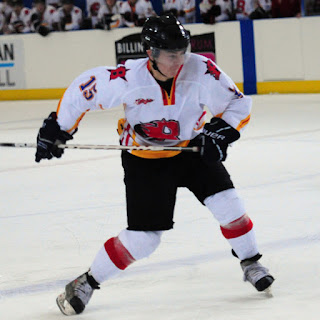 Stars travelled to Solihull fully expecting to add another win to their tally, but found the Barons in determined mood. Alex Lawson (left) grabbed a couple for the visitors who were surprisingly held 3-3.

Sheffield Spartans picked up a win and a draw to move into a play-off position. On Saturday they travelled to face Coventry Blaze at the Skydome. Gareth Owen put Blaze ahead in the second period, but Ollie Barron levelled the game three minutes from the end.

Spartans faced Whitley on Sunday in a thrilling clash in Sheffield. DJ Good gave Warriors an early lead but Shannon Lingwood equalised midway through the first. Shaun Kippin put the visitors back in front just before the first buzzer, and the home team looked in trouble when Good made it 3-1 in the 37th minute. Sheffield came out fired up in the third and tied the game with two quick goals in the 47th minute – Ollie and Will Barron scoring just eight seconds apart. Dean Holland put Warriors back in front, but goals by Elliott Knell (2), Will Barron and Ryan Handisides sealed a 7-4 win. 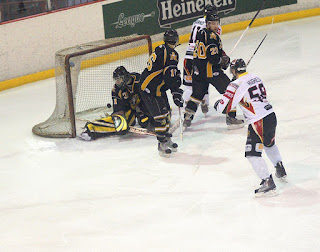 Romford Raiders clinched the ENL Southern Cup after a stirring comeback at Chelmsford Chieftains. The home team led 5-2 in the second period but Romford roared back to win 7-5 and secure the first trophy of the season.

Chelmsford are still top of ENL1 South after a 9-2 win over MK Thunder. Romford stay three points behind after disposing of Bracknell Hornets 11-3. Third placed Wightlink Raiders beat Slough Jets 4-2 but lost 3-1 to Cardiff Devils, while the Welsh outfit strengthened their hold on fourth by winning 6-2 at Bristol Pitbulls. Invicta Dynamos are fifth after a pair of road wins – 10-4 against Thunder and 12-3 at Streatham Redskins.

Guildford Flames are the new leaders of the EPL. Milos Melicherik (3) and Curtis Huppe (2) helped them to a 6-0 success at Telford Tigers and the pair grabbed the goals in a 2-1 win at Swindon Wildcats. Flames secured top spot after a 4-1 win over Slough Jets who also slumped 7-3 at home to Basingstoke – Nicky Chinn hit a hat-trick for Bison. Steve Moria and Daniel Volrab both bagged a brace as Bison crushed Swindon 7-2. 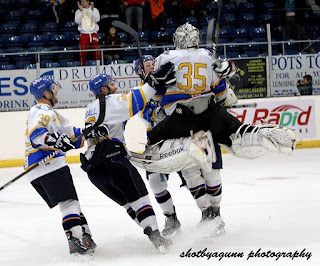 Fife Flyers (left) won their first game in the Elite League after a thriller with Hull Stingrays. Matt Siddall tied the game at 4-4 with just over a minute remaining and after a scoreless overtime period, Mike Hamilton hit Flyers’ winner in the shoot-out.

Belfast Giants remain top after a 4-3 shoot-out win over Dundee Stars and a 7-1 win over Fife. Sheffield Steelers beat Braehead Clan 4-2 and closed the gap on second placed Nottingham Panthers beating them 3-2 after overtime.