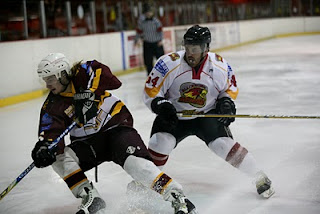 Nottingham Lions won their fifth game in a row to keep alive their slim hopes of catching Whitley Warriors at the top of ENL Division One North. Two goals apiece for Ben Bliss and Will Weldon helped the Lions to a 5-3 success over Northern Stars. The Warriors travelled to face Blackburn Hawks (left) and triumphed by the same scoreline to maintain their nine point lead.

Fife and Solway turned Sheffield Spartans’ Northern League trip to Scotland into a nightmare in emphatic fashion. Stephen Gunn (5), Josh Scoon (4), and Andy Samuel (3) were amongst the scorers as the Flyers hit sixteen without reply. The Spartans fared little better against Solway losing 6-2 with Sharks’ defenceman Juraj Senko bagging a hat-trick.

Guildford Flames are the new leaders of the EPL. Lukas Smital grabbed a couple as the Flames knocked Manchester Phoenix off top spot. Curtis Huppe gave Phoenix an early lead but the Flames moved up a gear to hit five unanswered goals. The following day they travelled to Slough to face a Jets team unbeaten in nine, but ran out comfortable 7-3 winners with Martin Masa, Nathan Rempel and David Longstaff all scoring twice. Phoenix recovered to overcome Peterborough Phantoms 4-2 with Tony Hand notching a couple while Blaz Emersic’s strike with less than a minute on the clock ensured the Jets grabbed the points from their trip to MK Lightning.

Basingstoke Bison took maximum points from their double header with Swindon Wildcats. Victor Kubenko scored a hat-trick in their 5-3 road win while Ciaron Long and Ondrej Lauko each bagged two in a 6-5 success on home ice. Sheffield Steeldogs’ miserable form continued as they lost to Peterborough (3-2 after a shoot-out) and Milton Keynes (5-2).

Hull Stingrays caused a surprise in the Elite League by defeating leaders Belfast Giants 3-2 in overtime. The Giants returned to winning ways by beating Braehead Clan. Nottingham Panthers’ victory over Newcastle Vipers keeps them in second place while Sheffield Steelers beat Hull and Dundee Stars to stay third. Both the Panthers and Steelers have games in hand on the Giants as the race for top spot begins to hot up.