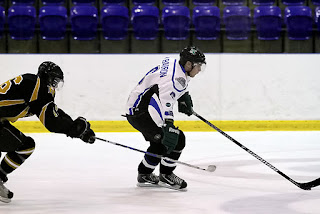 Billingham Stars remain top of ENL1 North, but not without a scare along the way. They recovered from 2-0 down at Telford Titans to draw 2-2 and also dropped a point at home to Sheffield Spartans with Nick Manning grabbing a hat-trick for the visitors in a 5-5 thriller. The Teessiders returned to winning ways with a 6-1 success against Blackburn Hawks.

Trafford Metros are second following a 7-3 win over Solihull Barons with Telford in third. Two goals each for Adam Taylor and Ashley Stanton helped Titans to a 7-2 victory at Nottingham Lions, but they fell 3-2 at home to Whitley Warriors despite leading twice – DJ Good scored twice for Whitley. Good repeated the feat as the defending champions overcame Solihull Barons 4-2 and hit another as the Warriors edged past Coventry Blaze 3-2.

Sheffield’s Will Barron (above) scored three in Spartans’ 5-2 win over the Lions who went on to lose 4-3 at Solihull. The Barons had trailed 3-0 but recovered in style with Richard Slater and Toni Scialdone both scoring twice. Despite the win, Solihull remain bottom after a 9-2 defeat to Blaze who themselves had been on the wrong end of things in a 9-3 loss to the Hawks.

Solway Sharks still lead the way in Division Two. They saw off promotion rivals Sutton Sting 5-3 and thumped Lancashire Raptors 11-1. Netminder Garry Russell made a rare appearance as a forward and scored three while Nathan Salem (3) and Adam Reynolds (2 – below) continued their prolific form. 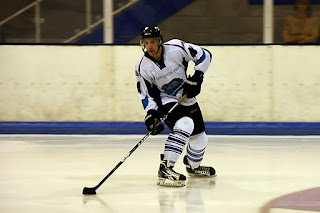 Flintshire Freeze have won four on the spin to stay in second place. James Parsons hit three in their 12-1 road win over the Raptors while Marc Lovell grabbed a couple as they beat Bradford Bulldogs 7-3 at home. Gavin Austin and Simon Furnival notched a pair as the Bulldogs were beaten 8-1 on home ice and Andy Chappell (3) and Parsons (2) led the scoring as Sheffield Senators fell 7-5 at Deeside.

Sutton are third after beating Hull Stingrays 6-3 home and away while the only other game saw Bradford thrash Fylde Flyers 9-2.

Chelmsford Chieftains are five points clear at the top of ENL1 South. Alan Green scored three as they beat Bracknell Hornets 12-1 then grabbed a pair in their 10-3 win over MK Thunder. Invicta Dynamos provided a sterner test but Chieftains secured the points with a thrilling 5-4 win. Romford Raiders are in second and retained their perfect record with an 11-3 win over Streatham Redskins and a 4-2 success at Oxford Stars. Reigning champions Wightlink Raiders moved into third with wins over Bristol Bulldogs (9-3), Oxford (4-3), Bracknell (10-0) and Cardiff Devils (6-3) – Canadian Joe Rand hit ten goals in the four games.

Romford’s Andrius Kaminskas grabbed a couple as the Raiders ran out comfortable 6-1 winners over Invicta in the ENL Cup South. The result leaves the Essex outfit clear at the top of the group.

MK Lightning are the new leaders of the EPL. Grant McPherson hit the decider in a 4-3 shoot-out win over Bracknell Bees in Milton Keynes and they followed up with two wins on the road at Telford Tigers (3-1) and Basingstoke Bison (1-0). Adam Carr hit a couple on their return to home ice as Bison were defeated 4-1. Second placed Slough Jets have also won four on the spin with Dan Davies scoring overtime winners at Manchester Phoenix and Telford. Darius Pliskauskas scored twice in 4-1 home wins over Sheffield Steeldogs and Guildford Flames. The Steeldogs are third after wins over Bracknell (2-1) and Peterborough Phantoms (5-2) while Phoenix are fourth after a 4-2 loss to Swindon Wildcats and a 5-3 win over the Bees.

Swindon sit in fifth place having beaten Peterborough 4-3 at home – Jaroslav Cesky scored twice – but the Phantoms gained revenge in the return fixture, Chris Allen bagging a couple in a 5-4 win. The Wildcats also crashed 7-0 to Guildford. The Flames smashed seven past struggling Bison with Curtis Huppe and Matt Towe both scoring twice. Basingstoke picked up the points in a 7-2 win over Telford while the Tigers shocked the Steeldogs by recovering from 3-0 down to snatch an unlikely 4-3 win after a shoot-out. Maris Ziedins hit the shoot-out winner for Peterborough as they won by the same score in Bracknell.

Belfast Giants still lead the Elite League despite a surprise 3-0 loss to Coventry Blaze. The Giants’ wins over Cardiff Devils (6-2) and Dundee Stars (7-1) sees them three points in front of Nottingham Panthers who beat Hull Stingrays (3-2) but also lost to Blaze (4-3). Sheffield Steelers are third following a comfortable 4-0 win over Dundee while Fife Flyers are still awaiting their first win of the season after losing twice to Edinburgh Capitals.