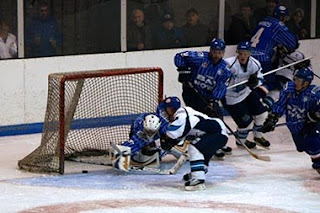 Flintshire Freeze drew level with Solihull Barons at the top of Division Two North after thumping nine past Bradford Bulldogs. Chris Jones hit four for Freeze with two each for James Parsons and Simon Furnival and one for marc Lovell completing the rout. The only other fixture saw Sutton Sting beat Sheffield Senators by the odd goal in eleven.

In the Northern League, Solway Sharks and Fife Flyers played out a thriller in Dumfries on Sunday (above) and deservedly shared the points at the final buzzer. The first two periods were a tight, tense affair with both teams spurning chances to take the lead. Marc Fowley broke the deadlock for the visitors a minute into the third period before a Bob Chalmers strike levelled things up. Flyers regained the lead with just eight minutes left through Andy Samuel and looked to be heading for the win, but Solway’s ace marksman Pavol Melichercik popped up with just eight seconds remaining to grab a point for the Sharks.

Manchester Phoenix stretched their lead in the EPL over Guildford Flames to three points with victories over Sheffield Steeldogs (4-2) and Telford Tigers (8-2). Flames had maintained their unbeaten start to the season with a 7-6 away win over Basingstoke Bison on Saturday but Slough Jets’ 4-2 win in Guildford on Sunday ended the run. Slough’s success gave them a four point weekend as it came on the back of a 3-1 win over Peterborough Phantoms. The Jets are now just a point behind third placed Basingstoke Bison who recovered from the loss to the Flames by defeating Bracknell Bees 5-3. MK Lightning are still struggling to find any consistency. Two goals from Andre Smulter helped last season’s champions to a 4-1 win over Telford but Sunday’s trip to Peterborough resulted in a 4-2 reverse. Swindon Wildcats bagged a couple of wins over Bracknell (7-5) and Sheffield (3-1) to edge away from the foot of the table.

Nottingham Panthers have closed the gap on Belfast Giants at the top of the Elite League to five points. Comfortable victories over Edinburgh Capitals (8-2) and Dundee Stars (7-4) moved the Panthers onto twenty points having played two games fewer than the Giants. Belfast followed their 5-3 win over Hull Stingrays with a 2-0 loss to Coventry Blaze who themselves had lost 4-1 to Sheffield Steelers. Braehead Clan and Cardiff Devils enjoyed four point weekends to leave the five teams behind the Giants covered by just four points.