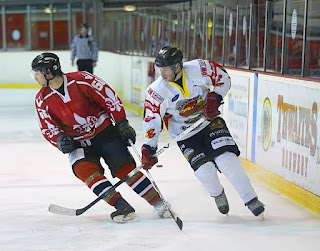 The race to be crowned ENL1 North champions is set to go down to the wire, with three points separating the top three teams. Billingham Stars still lead the way, but Whitley Warriors’ 5-2 win over Trafford Metros puts them just two points behind.

Blackburn Hawks kept up the pressure with a 5-3 win at Coventry Blaze – Sami Narkia (3) and Rick Hughes (2) got the goals – and a 3-0 success at Solihull Barons – Jordan Bannon (left) scored twice. Sheffield Spartans eased their relegation worries, drawing 4-4 at Trafford and winning 5-3 at Nottingham Lions.

Sutton Sting look strong favourites to claim the ENL2 promotion play-off place after crushing Lancashire Raptors 22-1. Rivals Flintshire Freeze slumped to a 3-1 defeat at Hull and now find themselves under pressure for third with the Stingrays also beating the Raptors (9-2).

Romford Raiders lost 3-2 at Cardiff Devils but still lead ENL1 South by two points from Chelmsford Chieftains. Wightlink forward Joe Rand bagged a hat-trick in a 4-4 draw at Bristol Pitbulls and followed up with two as the Raiders strengthened their grip on third with a 7-4 win at Streatham Redskins. Cardiff drew 5-5 at Bristol and are now only two points ahead of Invicta Dynamos having played a game more. 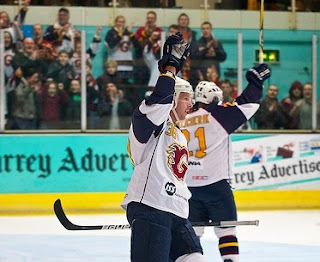 Guildford will play Sheffield in the EPL Cup Final. Flames beat Manchester 3-2 on home ice to complete a 5-4 aggregate success.

Belfast Giants enjoyed a perfect road trip to stay clear at the top of the Elite League. They won 8-0 at Hull Stingrays and 5-0 at Coventry Blaze and are now seven points ahead of Sheffield.