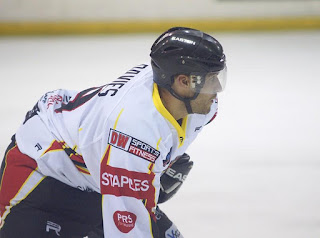 Telford Titans beat Billingham Stars 4-2 to move into third place in ENL1 North. Adam Taylor (2), Ryan Stanton and Dan Taylor scored the goals for Telford who have now won six in a row. Despite the defeat Billingham stay top after a 1-1 draw with Whitley Warriors and an 8-3 win over Solihull Barons. Warriors remain second after Dean Holland’s hat-trick helped them to an 8-6 win at Nottingham Lions. Blackburn Hawks are fourth after also beating the Lions 3-1 – Tom King scored two.

Trafford Metros’ play-off hopes suffered a double setback as they lost 5-4 at Solihull Barons and blew a 3-1 lead at home to the Hawks to draw 3-3 – Aaron Davies (above) grabbed the equaliser with just over a minute left. Coventry Blaze beat Nottingham 5-2 to leave Lions in the relegation play-off slot, while Sheffield Spartans eased their own relegation worries by beating Blaze 3-1.

Solway Sharks made it 19 ENL2 wins on the spin by beating Lancashire Raptors, Flintshire Freeze and Fylde Flyers. Raptors were crushed 13-1 – Stevie Adams scored three – while Adam Reynolds hit four in their 11-1 win at Flintshire. Reynolds and Nathan Salem both scored twice as Fylde Flyers were outclassed 11-3. Sutton Sting remain second after a 10-1 win over the Raptors. Hull Stingrays are just three points behind third placed Freeze after beating Fylde (7-6), Bradford Bulldogs (5-3) and Lancashire (8-3).

Romford Raiders are the new leaders of ENL1 South. Anthony Leone and Danny Marshall both scored two in a 9-2 win against Bristol Bulldogs, and top scorer Juraj Huska was on target in their 5-2 win over title rivals Chelmsford Chieftains. Wightlink Raiders stay third after wins over Bracknell Hornets (4-2) and MK Thunder (10-2). Cardiff Devils beat Streatham Redskins 3-2 and Bracknell 7-4, but are under pressure for fourth from Invicta Dynamos who beat the Hornets 9-3 and Slough Jets 12-1.

Guildford Flames hold a four point lead in the EPL despite some mixed results. They lost 4-1 at Manchester Phoenix but won the reverse fixture 5-2. Rick Plant and Dave Longstaff both scored two in their 9-1 demolition of Telford though they had to settle for a point in a 5-4 shoot-out loss away to the Tigers. Slough Jets are up to second after beating Bracknell Bees (4-3) and Peterborough Phantoms (5-2), though they only took a point in a 5-4 shoot-out loss to Basingstoke Bison. Jets are level on points with Phoenix who beat Sheffield Steeldogs (3-0), but lost 4-3 after overtime at Bracknell.

Despite a 3-1 loss at Telford, Sheffield are now fourth after beating MK Lightning (2-0) and Swindon Wildcats (4-3 after a shoot-out & 4-2). Lightning beat Basingstoke 2-0 on the road, but two goals from Ollie Bronnimann helped Bison to a 5-1 success in Milton Keynes. Steve Moria’s men have been in good form of late and they are just three points behind Lightning after a 5-3 win at Swindon Wildcats. Peterborough Phantoms won the basement battle against Telford 9-5 and followed up with a 3-2 shoot-out win over Bracknell.

Belfast Giants’ lead is down to five points at the top of the Elite League. Title rivals Nottingham Panthers won 3-2 in Belfast and kept up the pressure by beating Fife Flyers (4-1) and Coventry Blaze (6-1 twice). Giants maintained their challenge with wins over Edinburgh Capitals (6-2), Braehead Clan (3-2 after a shoot-out) and Fife (3-0).

Sheffield Steelers are two points further back but have six games in hand on the top two. They beat Cardiff Devils 3-2 after overtime and followed up with a 4-3 shoot-out win at Dundee Stars. Steelers extended their winning run to nine with two victories against Edinburgh Capitals (4-2 & 6-3).