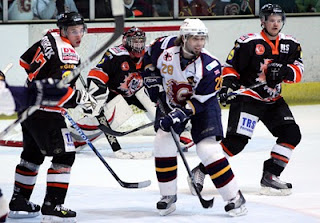 Whitley Warriors march to the ENL Division One North title continued with a comfortable 5-2 win over Nottingham Lions. Ryan Sample hit a hat-trick for the Warriors who have dropped just one point all season. Coventry Blaze ENL moved into a distant second place beating Telford Titans 2-1 and drawing 3-3 with Trafford Metros. Sheffield Spartans recent woes continued as they fell 6-4 to the Titans.

Wightlink Raiders still lead the way in ENL Division One South. Player-Coach Jeremy Cornish bagged a couple in a 7-2 win over MK Thunder. Former Blackburn Hawks forward Richard Bentham scored on his debut for the Raiders.

Manchester Phoenix and Guildford Flames are locked together at the top of the EPL. Phoenix beat Swindon Wildcats 9-3 and Sheffield Steeldogs 4-0 to move level with the Flames who had a mixed weekend. Martin Masa (above) hit three for the Flames in a hard fought 4-3 success at Telford Tigers who then exacted revenge in Guildford with a 5-4 victory in overtime (below). Slough Jets kept up the pressure on the top two defeating Sheffield 4-1 and Bracknell Bees 3-1. Viktor Kubenko inspired Basingstoke Bison to a pair of wins over Peterborough Phantoms. He scored twice in a 6-3 home success before grabbing four during a 6-5 road win. MK Lightning also won twice against Bracknell (3-2) and Swindon (7-2) and with games in hand could yet emerge as title contenders.

Sheffield Steelers’ trip to Northern Ireland saw them split the points in an Elite League double header with Belfast Giants. Nottingham Panthers comfortable disposed of Edinburgh Capitals (7-1) but could only draw with Hull Stingrays – a result which leaves the Giants three points clear.

Coventry Blaze’s hopes of reaching the Super Final of the Continental Cup came to an end following a 7-3 defeat to hosts Rouen Dragons in the final-game decider. Blaze had won their first two Group D games against Latvian champions Liepajas Metalurgs and Polish side Cracovia Krakow. But they came up short against the Dragons, who punished Blaze with four powerplay goals and two short-handed strikes.