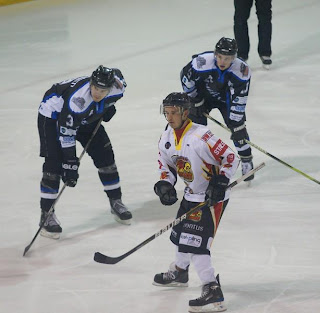 Billingham Stars’ perfect start to the season in ENL1 North continued with wins over Coventry Blaze, Sheffield Spartans and Telford Titans. Paul Windridge and Cal Davies both scored twice in a 4-2 win over Blaze while Spartans were thumped 8-4 with Anthony Price and Davies again grabbing a couple. An 8-1 success over the Titans sent the Stars to the top of the table with James Moss and Simon Hehir each bagging a brace.

Trafford Metros drop to second following a 7-3 loss to Sheffield – Nick Manning scored twice for Spartans – and a 4-2 defeat to Telford who also beat Solihull Barons 5-3 with Adam Taylor hitting a hat-trick for the Titans. However, Metros’ 5-0 win over Blackburn Hawks sees them level on points with the Stars. Two goals from Aaron Davies and one each from Gary Dixon (above) and Jordan Bannon helped the Hawks to a 4-2 victory over Sheffield, while DJ Good, Shaun Kippin and Jordan Barnes scored as Whitley Warriors secured a 3-2 win over Coventry.

Blaze forward Rikki Bryniarski scored twice as they beat Nottingham 3-1 while the Lions also fell 3-2 to Solihull with Lui Brindle hitting two for the Barons. Solihull blew a four goal lead to the Spartans, eventually losing 7-4 with Andy Turner (3) and Ollie Barron (2) leading the scoring. 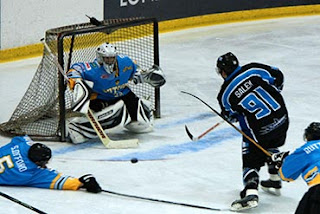 Solway Sharks remain unbeaten in ENL2 North. Mark Gallagher, Adam Reynolds, Joe Coulter and Lewis Gold all scored twice in a 10-2 win at Hull Stingrays. Gallagher and Gold went onto to grab four apiece in the 16-0 demolition of Fylde Flyers with Ross Murray hitting a hat-trick and Nathan Salem (above) and Reynolds scoring a couple each. Sharks then faced the only other unbeaten team, Sutton Sting, and edged home 8-5 with Aiden Fulton notching three for the Dumfries outfit. Sting went into the game on the back of a 5-2 win over Sheffield Senators and led the Sharks 5-4 at the end of the second period but had no answer to Solway’s surge in the third.

Flintshire’s Chris Jones and James Parsons both hit hat-tricks as Freeze beat Bradford Bulldogs 6-4. The Senators beat Bradford 7-3 on home ice before the Bulldogs grabbed their first points of the season winning 4-1 in the return fixture. Hull Stingrays smashed 11 without reply against a still pointless Lancashire Raptors.

Chelmsford Chieftains are top of ENL1 South after wins over Cardiff Devils (5-3), Bracknell Hornets (12-0) and Wightlink Raiders (6-3). Just a point behind are Romford Raiders who boast a 100% record. The Raiders defeated the Chieftains 5-4 and went on to thump MK Thunder 9-0. Invicta Dynamos are third following their 6-5 win over Wightlink who also surprisingly lost 4-1 to MK Thunder. The reigning champions recovered to beat Slough Jets 7-0. 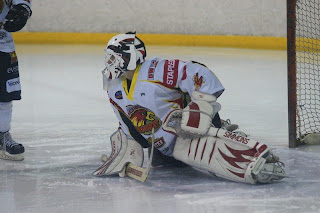 In the ENL North Cup, Solway beat Billingham 2-1 with goals from Alan Crane and Mark Gallagher cancelling out Andrew Fletcher’s opener, while Blackburn got their campaign underway with a 3-2 win over Whitley at Hillheads – Matt Viney (2) and Jordan Bannon scored for Hawks with Callum Watson and Martin Crammond replying for Warriors. Hawks netminder Danny Brittle (left) was in inspired form gaining a well deserved MVP.

Romford travelled to Kent to face Invicta in the ENL South Cup and secured a 10-5 victory to maintain their unbeaten record in the group. Player/coach Danny Marshall led the way with a hat-trick.

Sheffield Steeldogs are the early leaders of the EPL. They followed a 3-2 overtime win at Swindon Wildcats with a 4-1 success in the reverse fixture before falling 3-2 to Steve Moria’s Basingstoke Bison. The Steeldogs returned to winning ways as two strikes from Janis Ozolins helped them to a 4-2 win over MK Lightning.

Reigning champions Manchester Phoenix are level on points with Sheffield after also winning three of their first four matches. Martin Cingel scored twice in a 5-3 success at Slough Jets (highlights above) and repeated the feat in a 5-4 overtime win over Bison. Phoenix crashed 5-2 to Lightning with Lukas Zatopek and Adam Carr both scoring two, but recovered to ease past Swindon 3-2 – Cingel again scoring twice.

Swindon and Basingstoke are a point behind the top two. Two goals each for Jonas Hoog and Jaroslav Cesky were the highlights of Wildcats’ 8-1 home win over Telford Tigers who crumbled 6-0 in the return fixture. Bison beat Bracknell Bees 4-2 at home but two goals from Rob Lamey and Martin Masa saw the Bees triumph 7-3 in Bracknell.

Slough Jets are fifth despite a 5-2 loss in Bracknell. Four Adam Calder goals helped the Jets gain revenge over the Bees with a 7-3 win while two Mindy Kieras strikes saw off Peterborough Phantoms 7-4. Play-off champions Guildford were shocked 4-1 by Telford with Josh Bruce grabbing a couple, but the Flames recovered in style with a pair of 7-1 wins over Peterborough and Telford.

Belfast Giants still lead the way in the Elite League. The Giants beat Fife Flyers 9-1 and edged past title rivals Nottingham Panthers 2-1 before easily dismissing Edinburgh Capitals 5-0. Sheffield Steelers are second after winning three on the spin at home. They followed a 6-4 success over Coventry Blaze with two shut-outs over Hull Stingrays (6-0) and Fife (5-0). Blaze are third after a thrilling 7-6 over the Panthers and a 4-3 overtime victory against Dundee Stars. Wins for the Panthers over Hull (6-2) and the Stars (4-1) sees them in fourth place.

Braehead Clan have won two of their first three games defeating Dundee 6-0 and Cardiff Devils 3-1. Their only loss so far is a 5-2 reverse in Cardiff. Fife picked up their first ever Elite League point with a 3-2 shootout loss to the Stingrays.