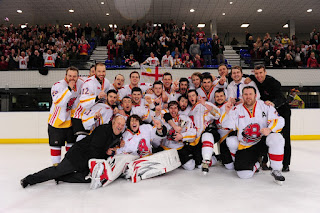 Billingham Stars secured a memorable double with a 6-3 win over Blackburn Hawks in the ENL1 North play-off final second leg at TFM Ice Arena on Sunday.

Hawks travelled to Teesside with a 2-1 lead from the first leg and had the better of the early exchanges, but it was Stars who got the opening goal when Anthony Price fired past Danny Brittle.

The Hawks netminder reacted badly to the goal and launched himself at Billingham’s Andy Fletcher. When the officials restored order, Brittle was dismissed for unnecessary roughness leaving Stuey Ashton to take over.

Just a minute later, with the officials looking in danger of losing control of the game, Billingham defender Richie Thornton was dismissed for an elbows call. Stars extended their lead on six minutes as Andy Finn put them ahead for the first time overall. Dave Thomas made it 3-0 on the night early in the second, but Stars were rocked when another strange high sticks call against Martyn Davies saw the third dismissal of the night.

Hawks took advantage of the five minute powerplay scoring twice through Player/Coach Jared Owen and Lance Derbyshire to level the tie. Scott Ward edged Billingham back in front in the 35th minute, but Tom King tied things up again just before the end of the second.

Blackburn started the third on the front foot but found Stars stopper James Flavell in fine form. Rick Hughes should have put the visitors ahead after finding himself clear on goal, but was denied by Flavell’s reflexes and they were made to pay midway through the period when Adam Robinson raced away to make it 6-5 on aggregate.

Hawks pressed forward looking for the equaliser which would send the game into overtime, but with three minutes remaining lost defender Scott Glover to a hooking penalty. Owen called a time out and Ashton was pulled in a last ditch attempt to save the game, but with just under a minute left Price intercepted the puck and teed up Paul Windridge, who fired into the empty net to seal a 7-5 aggregate success.

Stars’ coach Stephen Foster was delighted with his team’s efforts. “We wanted an early goal because we couldn’t afford to have to start chasing the game,” said Foster. Blackburn will feel aggrieved because they lost their keeper, but in big games you need to keep your focus, he didn’t. It’s great to be double champions, at the start of the season myself and Terry (Ward) talked, and we were convinced we had the right blend of experience and youthful enthusiasm to go all the way in our first season back.”

Owen was understandably disappointed with the outcome. “I’m gutted about the final result. I felt like it was going to be a good game that would be settled by two teams going head to head, unfortunately as is to often the case with this league, this didn’t happen,” he said. “To lose your starting goalie in the first five minutes on an extremely soft call is a massive loss to the team, and to be honest ruined the game as a spectacle. Stuey Ashton came in and performed admirably and I cannot say enough about the character and effort from my team. On reflection I feel we dominated the play 5 on 5 and just didn’t capitalise on the chances we created and the danger is one slip up and you can leak a goal. Congratulations to Billingham Stars on winning the play-off final.”

The final action of the season takes place over the weekend of May 12th and 13th, as Nottingham Lions and Sutton Sting face-off for a place in ENL1 next season.