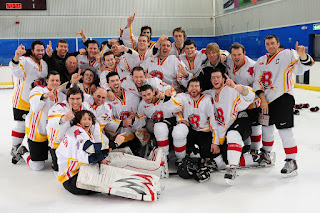 Billingham Stars (left) are the new ENL1 North champions. Needing a three point weekend to claim the crown, Stars won 4-1 at Sheffield Spartans and recovered from 2-0 down at home to Trafford Metros to draw 2-2. Whitley Warriors secured second with a pair of wins – 4-3 at Trafford and 8-7 at home to Sheffield.

Coventry Blaze ensured their safety with a remarkable comeback against Blackburn. The Hawks raced into a four goal lead but Blaze roared back to win 6-4. Nottingham Lions face a relegation play-off against ENL2 runners-up Sutton Sting after losing 7-4 at home to the Hawks – Jordan Bannon grabbed a hat-trick for the visitors. 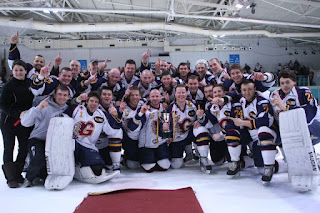 Guildford Flames (right) have claimed the EPL title in dramatic fashion. After a 3-1 reverse at MK Lightning, Flames captured the trophy with a 4-3 overtime win against Basingstoke Bison – Jez Lundin grabbed winner. Manchester Phoenix stay second despite a pair of defeats. Janis Ozolins notched his 50th goal of the season as they fell 2-1 at Sheffield Steeldogs and Darius Pliskauskas scored three for Slough Jets in their 5-2 win in Altrincham.

Jonas Hoog’s trio helped Swindon Wildcats recover from 5-2 down at home to Lightning to win 6-5 and they completed a memorable week with 4-2 wins at Slough and Sheffield. Peterborough Phantoms beat Bracknell Bees twice – 6-2 & 2-0 – to move into the final play-off slot while Telford Tigers enjoyed a rare four point weekend winning 4-1 at Basingstoke and 2-0 at home to MK Lightning.

Belfast Giants secured the Elite League crown in style with a 5-1 win at home to title rivals Sheffield Steelers. Giants celebrated the success with a 5-2 victory over the Steelers who completed a miserable week losing 4-3 at Hull Stingrays. Nottingham Panthers beat Braehead Clan 4-3 after overtime to seal third place.