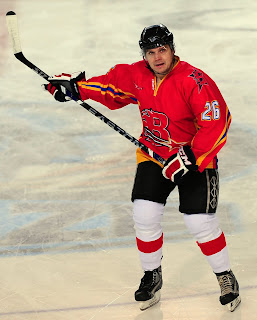 ENL1 North leaders Billingham Stars won a thrilling North East derby against Whitley Warriors at Hillheads. Warriors took the lead after seven minutes through Callum Watson but Anthony Price levelled things up in the 13th minute. Dean Holland put Warriors back in front moments later, before Simon Hehir (left) immediately tied things up again. DJ Good made it 3-2 to the home team after 16 minutes, but Jamie Pattison sent Stars in level at the end of the first.

Neither team could find the back of the net in the second period, but Stars came out flying in the third with Scott Ward making it 4-3 after 41 minutes. Michael Elder added a fifth midway through the period to secure the points and a seven point lead at the top of the table.

Third placed Trafford suffered a pair of humiliating defeats on the road. Ill-discipline cost them dearly at Coventry as Blaze eased to a 5-1 success and Metros then collapsed at Blackburn as the Hawks romped to a 8-1 win – Jared Owen (below) scored twice for Hawks. 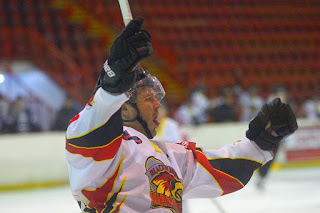 Sheffield Spartans recovered from 7-4 down at home to Solihull Barons to draw 7-7, but went on to lose 3-1 to Telford Titans – Karol Jets (2) and Paul Rigby scored Titans goals. Nottingham Lions eased their relegation worries with a 6-2 win at home to the Barons.

Solway Sharks crushed Lancashire Raptors 24-1 to stay unbeaten at the top of ENL2 North. Nathan Salem (9), Gary Russell (5) and Adam Reynolds (4) led the scoring for Sharks. Flintshire Freeze moved back into second place with a 15-6 win over Fylde Flyers – Simon Furnival (5), James Parsons (3) and Marc Lovell (3) were on the scoresheet for Freeze. Bradford Bulldogs enjoyed a three point weekend with a 5-5 draw at home to Hull Stingrays and an 8-4 win at Sheffield Senators.

Romford Raiders are the new leaders of ENL1 South. Shaun Yardley scored a couple in a 5-2 win at Bracknell Hornets and they followed up with a 9-3 win at home to Invicta Dynamos. Chelmsford Chieftains drop to second after losing 5-4 at Wightlink Raiders – Dominic Hopkins grabbed the winner two minutes from time. Chieftains bounced back with a comfortable 10-3 win at Oxford Stars.

Guildford Flames have opened up a four point lead at the top of the EPL. Nathan Rempel scored twice in an 8-0 win over Bracknell Bees and Flames recovered from 3-1 in the reverse fixture to seal 4-3 win after a shoot-out – Curtis Huppe scored the winner. Doug Sheppard bagged a hat-trick as Slough beat Manchester Phoenix 9-0, but the Jets slumped to a shock 4-3 loss at lowly Peterborough Phantoms. 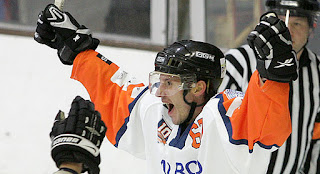 Sheffield Steelers have closed the gap on Belfast Giants to five points at the top of the Elite League. They beat Fife Flyers 5-3 at home and recovered from 5-1 down in the return at Fife to force overtime before clinching the points a minute into the extra period. Giants beat Dundee Stars 5-4 while third placed Nottingham Panthers slipped to a surprise 4-3 shoot-out loss at home to Coventry Blaze.