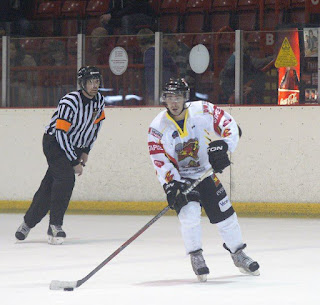 Blackburn Hawks grabbed a narrow advantage over Billingham Stars in the first leg of the ENL1 North play-off final. In front of almost 1300 fans at Blackburn Arena, Billingham dominated the early stages but couldn’t find a way past Hawks’ netminder Danny Brittle.

The home team moved in front early in the second through Jordan Bannon, but Stars continued to look dangerous and deservedly drew level after Paul Windridge pounced on some uncertain Hawks defending.

Rick Hughes and Dave Meikle combined to set up Chris Arnone (above), who coolly fired home to make it 2-1 just before the break. Both teams had chances in the third but neither could add to their tally. The teams meet again for the second leg at Billingham next Sunday (face-off 6.30 pm).

Chelmsford Chieftains secured the ENL1 South play-off title after a stirring final against Romford. The Raiders looked to have taken control of the tie after a 4-4 draw in the first leg at Chelmsford, but the Chieftains produced a stunning performance in the return to run out 6-2 winners on the night and 10-6 overall.