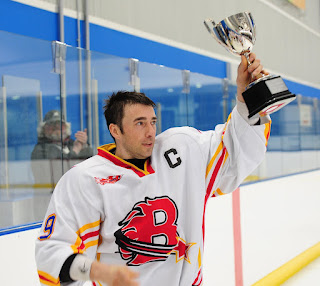 Titans ended their season on a high with a 15-3 success over relegated Solihull, though the Barons said goodbye to ENL1 with a 3-2 win at home to Whitley. The Warriors now face Blackburn in the other play-off semi-final. Rhys Gillat (2) and Kieran Papps were on target as Coventry Blaze won 3-2 at Trafford Metros.

Chelmsford Chieftains completed their ENL1 South league fixtures with a pair of wins – 8-0 at MK Thunder and 2-0 at home to Slough Jets. Chieftains are two points ahead of Romford after the Raiders won 4-1 at Cardiff Devils. Romford’s final two games are against Slough (A) and Wightlink Raiders (H). Invicta Dynamos clinched fourth place after winning 7-3 at Bracknell Hornets and 4-2 at home to Bristol Pitbulls. 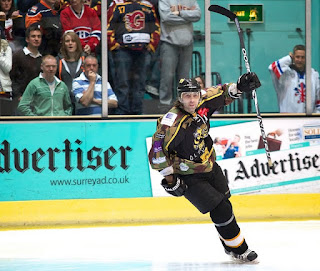 Manchester Phoenix strengthened their grip on second place in the EPL with a couple of impressive performances. Two goals from Luke Boothroyd helped them on their way to a 5-4 win at Swindon Wildcats and they followed up with a 5-2 success at home to champions Guildford. The Flames suffered a rare pointless weekend as they also fell 6-5 at home to Bracknell Bees – Martin Masa (right) & James Galazzi both scored two for the visitors. Shaun Thompson’s overtime winner improved the Bees’ play-off prospects as they beat MK Lightning 4-3.

Janis Ozolins grabbed a hat-trick as Sheffield Steeldogs won 6-2 at Basingstoke, though Bison gained revenge with a 2-1 shoot-out success in the reverse fixture. Slough Jets split their weekend series with Telford Tigers winning 4-1 on home ice, but slipping to a shock 4-3 loss in Telford. Peterborough Phantoms dropped out of the final play-off slot after crashing 4-1 at MK Lightning, but a 4-3 win at home to Swindon keeps them just a point behind Bracknell with two games to go.