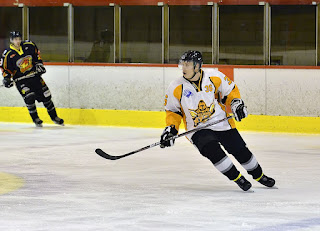 Billingham Stars edged closer to the ENL1 North title with a 2-2 draw at Whitley Warriors. Adam Robinson and Michael Elder gave Stars an early lead, but goals from Mark Good and Dean Holland helped Warriors snatch a point. Just one point separates the top two but Stars have a game in hand. Warriors could have drawn level with Billingham, but blew a 3-1 lead at Sheffield to draw 3-3 – Joe Millard scored a couple for Spartans.

Blackburn Hawks missed the chance to close the gap at the top after losing 4-3 at home to Telford – Ed Eaton and Chris Jones (above) both scored twice for Titans. Nottingham Lions boosted their survival hopes with a 5-2 win at Trafford Metros – Joe Wightman scored four. Fellow strugglers Coventry Blaze also won – 3-1 at Solihull. The result confirms Barons’ relegation back to ENL2. 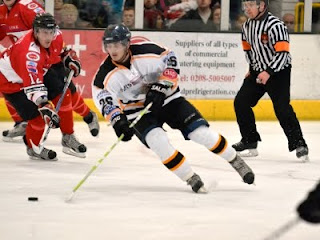 Chelmsford Chieftains missed the chance to draw level with Romford Raiders at the top of ENL2 South after crashing to defeat at Wightlink. Two goals from Alex Murray helped the islanders to a 6-2 success. Chieftains bounced back in style with a 15-3 win over Bracknell Hornets – Danny Hammond and Jakub Klima (above) both hit hat-tricks. 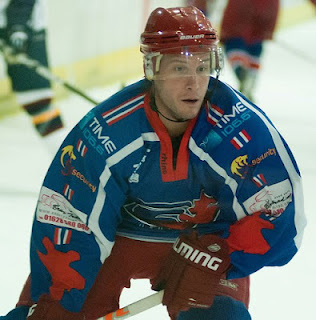 Guildford Flames are ten points clear at the top of the EPL. They won 5-3 at Peterborough Phantoms and followed up with a 3-2 win at home in the reverse fixture.

Manchester Phoenix stay second after splitting a double header with Swindon. Two goals from Aaron Nell helped the Widcats to a 6-3 success on home ice, but Luke Boothroyd’s overtime winner gave Phoenix a 6-5 victory in the return.

Third placed Sheffield Steeldogs won two out of three, beating Basingstoke Bison 2-1 and MK Lightning 3-1 but they fell by the same scoreline to Lightning.

Slough Jets remain fourth after a pair of wins over Basingstoke. Aaron Connolly scored three as Jets won 8-3 on the road, while Joe Greener and Doug Sheppard (above) both bagged a couple in Jets’ 4-3 win at home. Bracknell Bees boosted their play-off hopes with two wins over Telford Tigers – 4-3 & 11-1.

Belfast Giants look favourites to claim the Elite League crown after a 3-2 shoot-out success at Sheffield Steelers. Giants followed up with a 6-1 win at Braehead Clan and are eight points clear of the Steelers. Sheffield stayed in the hunt with a narrow 2-1 win at Hull Stingrays, while third placed Nottingham Panthers beat Fife Flyers 4-3 and Coventry Blaze 5-3.