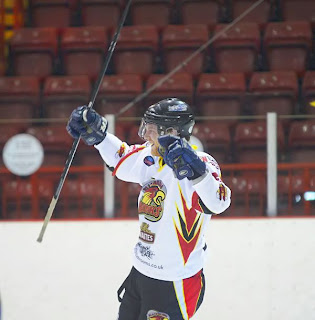 Billingham Stars got their ENL1 North title challenge back on track with a 3-0 win at Solihull Barons – James Moss, Andy Thornton and Simon Hehir got the goals. Telford Titans boosted their play-off hopes beating Nottingham Lions 8-3 and Coventry Blaze 9-4.

Two goals by Dave Meikle (left) helped Blackburn Hawks to a 4-2 win over Sheffield Spartans and keeps them in the play-off picture. Trafford Metros’ hopes are fading as they slumped to a 2-0 defeat in Nottingham. Solihull’s 8-0 loss to Spartans keeps them bottom.

Solway Sharks need one more win to clinch ENL2 North. Two goals from Nathan Salem helped them to a 7-3 win over Sutton Sting and they followed up with a 12-0 win at Sheffield Senators – Marc Fowley scored four. Simon Furnival and James Parsons both grabbed hat-tricks as Flintshire Freeze beat Lancashire Raptors 10-1. Fylde Flyers also hit double figures as they smashed eleven without reply against the Raptors.

Romford Raiders still lead ENL2 South despite losing 5-2 at Wightlink Raiders. Chelmsford Cheiftains beat Cardiff Devils 7-2 and could have gone level on points with Romford if they won at Invicta, but Dynamos’ Ryan Ellis grabbed the winner in a 3-2 win for the Kent outfit.

Guildford Flames have an eight point lead at the top of the EPL. They twice beat Peterborough Phantoms (6-2 & 7-3) before taking a point in a 6-5 shoot-out loss at Bracknell Bees. Manchester Phoenix are second after a 9-1 win at home to Telford Tigers and a 2-1 loss in overtime at Sheffield Steeldogs. The win completed a remarkable weekend for Sheffield who also won 9-2 at Slough Jets – Janis Ozolins (4) and Edgar Bebris (3) led the scoring. 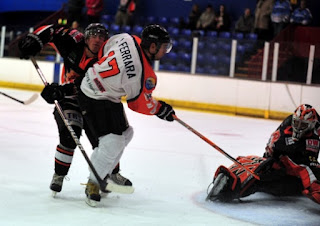 Belfast Giants are nine points clear at the top of the Elite League. They faced a weekend double header at Nottingham and claimed two wins – 4-3 after a shoot-out and 3-2. Sheffield Steelers are up to second after a pair of wins over Coventry Blaze (3-2 & 5-3).