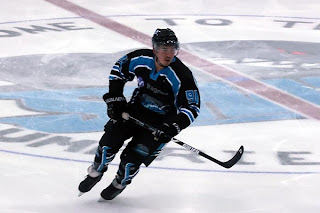 Deeside Dragons got their NIHL2 North promotion bid back on track with a 6-0 win at home to Blackburn Eagles. Hull Stingrays moved up to fourth in the table after beating Fylde Flyers 8-1 – Jordan Fisher scored three.

Wightlink Raiders still lead the way in NIHL1 South after a 3-2 win at Solent & Gosport Devils. Chelmsford Chieftains lost for the first time this season – 3-0 at Cardiff Devils. Romford Raiders kept their 100% league record intact with an 8-1 win at home to MK Thunder – AJ Smith & Frankie Harvey both bagged a pair. Invicta Dynamos came from behind to beat Streatham Redskins 5-3. Two goals from Sean Scarborough helped Cardiff to a 3-3 draw at Streatham. In the South East Trophy Wightlink beat Romford 4-0, while Chelmsford won 8-3 against Invicta.

Manchester Phoenix are the new leaders of the EPL after a pair of wins over Guildford Flames. Phoenix eased to a 4-2 road success and followed up with a 4-3 win at home – Joachim Flatten scored the overtime winner. Basingstoke Bison needed a last minute winner from Greg Chambers to beat Telford Tigers 4-3. Frantisek Bakrlik hit a hat-trick as Slough Jets beat Bracknell Bees 6-4.

Sheffield Steeldogs beat Swindon Wildcats 6-5 after overtime – Derek Campbell got the winner. Lukas Smital hit the winner for Bracknell as they beat Swindon 3-2 after a shoot-out. MK Lightning beat Peterborough 4-1, but the Phantoms gained revenge in the reverse fixture as two goals from Tom Carlon guided them to a 5-2 win.

Detroit Red Wings forward Drew Miller helped Braehead Clan to a four point haul in his debut weekend in the Elite League. Clan beat Dundee Stars 5-2 – Jade Galbraith scored two – and followed up with a 6-3 win over Edinburgh Capials – Galbraith (3) & Miller were amongst the goals. Kris Hogg’s hat-trick helped Fife Flyers to a 4-2 win at home to Sheffield. The Steelers bounced back with a 2-1 win over Belfast Giants – Tom Sestito scored on his home debut.