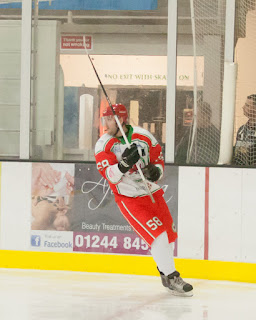 Solway Sharks still lead NIHL1 North after two goals from Adam Reynolds helped them to a 6-3 win at title rivals Billingham Stars. The victory completed a four-point weekend for the Sharks who also won 4-0 at home to Sutton Sting – Nathan Salem scored twice. Stars are five points behind Sharks with two games in hand after a 2-1 win at Sheffield Spartans. Trafford Metros picked up their second win of the season with a 2-1 success at home to Whitley Warriors.

Bracknell Hornets are the new leaders in NIHL1 South after beating Streatham Redskins 3-2. Chelmsford Chieftains edged past Solent & Gosport Devils 3-2, while Cardiff Devils and MK Thunder fought out a 4-4 draw. Justin Noble scored four as Invicta Dynamos won 11-2 at Oxford City Stars in the NIHL South Cup. Chelmsford lost 4-3 at Invicta in the South East Trophy, but still progress to the final to meet Wightlink Raiders. Jeremy Cornish’s team lost 4-2 at Romford Raiders, but qualify with the better head-to-head record.

EPL leaders Manchester Phoenix lost 3-1 at Basingstoke Bison – Doug Sheppard scored twice – but bounced back to beat MK Lightning 3-2 after a shoot-out – Michael Psurny got the winner. Guildford Flames returned to form, winning 7-3 at Peterborough Phantoms – Curtis Huppe hit a hat-trick – and 6-2 at home to Basingstoke. Slough Jets won 5-0 at Sheffield Steeldogs – Aaron Connolly scored two – and made it maximum points for the week with a 4-1 win at home to Swindon Wildcats. Shaun Thompson hit the winner for Bracknell in their 4-3 shoot-out win at Swindon and Rob Lamey bagged a pair as the Bees thrashed Sheffield 8-1. Telford Tigers picked up their first points of the season with a 5-4 win at MK Lightning, but Ondrej Lauko’s hat-trick brought them back down to earth as they fell 7-0 at home to Peterborough.

Belfast Giants went out of the Continental Cup at the second group stage. Giants beat Holland’s Geleen Eaters 11-1 & Romania’s HSC Csikszereda 4-0, but found Landshut Cannibals much too strong, as the Germans ran out 7-1 winners to progress to the next round.