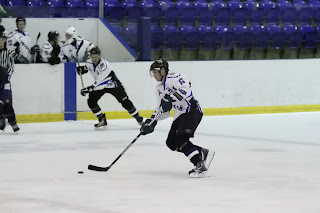 Billingham Stars edged past Sutton Sting 3-2 in the Trans-Pennine East/West Trophy on Saturday, before securing a 5-2 league success on home ice the following evening – Michael Bowman & Stephen Wallace both scored twice. Will Barron (above) hit a hat-trick as Sheffield won 6-4 at Trafford, and the Metros completed a miserable weekend losing by the same score at Whitley Warriors.

Chelmsford Chieftains lead NIHL1 South after a pair of wins. Two goals each for James Ayling & Michael Ranby helped them to a 7-2 success at Bracknell Hornets, and they followed up with an 8-0 victory at home to Streatham Redskins – Gary Clarke (2) & Grant Bartlett (2) led the scoring. Sean Scarborough bagged four as Cardiff beat Streatham 12-3 and hit a hat-trick in Devils’ 6-3 win at Invicta Dynamos. Juraj Huska scored five as Romford secured the Raiders Cup with a 12-7 aggregate win over Wightlink.

Guildford Flames are the early leaders of the EPL after a 5-2 win at home to MK Lightning – Ben Campbell scored twice. Slough Jets are level on points with Flames after a 7-3 victory at Swindon Wildcats –Frantisek Bakrlik & Matt Towalski both scored two – and a 5-3 win at home to Telford Tigers – Mindy Kieras hit a hat-trick. Basingstoke Bison are third after a 4-0 win at home to Peterborough Phantoms – Joe Miller scored three – but missed the chance to go top after a 3-2 loss at Bracknell Bees. Manchester Phoenix slumped to an 8-2 loss at MK Lightning – Leigh Jamieson got a hat-trick – but recovered to win 3-1 at home to Telford. Sheffield Steeldogs lost 4-2 at home to Bracknell, while Peterborough edged past Swindon 2-1.

Sheffield Steelers enjoyed an excellent weekend in the Elite League with wins over their biggest rivals. Ashley Tait became the league’s all-time leading points scorer with a goal and an assist in their 3-2 win at Nottingham Panthers, before Jeff Legue’s shoot-out winner sealed a 5-4 victory at home to Belfast. The Giants picked up two points with a narrow 2-1 win at home to Dundee Stars. Greg Leeb grabbed the overtime winner as Coventry beat Cardiff Devils 2-1, but Blaze failed to follow up at Fife as they fell 3-2 after a shoot-out – Jason Pitton hit Flyers’ winner. Dominic Osman scored three as Hull Stingrays beat Edinburgh 6-3, but the Capitals gained revenge on home ice with Michal Dobron’s strike sealing a 4-3 shoot-out win.

In the Challenge Cup, Fife beat Dundee 5-2 – Casey Haines scored a couple – but Stars bounced back with a 2-1 win at home to Braehead Clan. Chris Blight hit the overtime winner as Cardiff beat Nottingham 6-5.