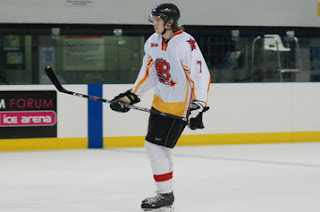 Billingham Stars moved a point behind NIHL1 North leaders Solway Sharks after a four-point weekend. James McCabe (left) scored twice as Stars came from behind to win 5-3 at Sheffield Spartans and they followed up with a 6-1 victory at home to Trafford Metros. Whitley Warriors are third after winning 5-3 at home to Sheffield, while Blackburn Hawks beat Deeside Dragons 4-1 in the Trans-Pennine East/West Trophy.

Wightlink Raiders moved back to the top of NIHL1 South after a pair of wins. They beat Cardiff Devils 6-4 – Jiri Hanzal hit a hat-trick – and followed up with a 2-1 win at Bracknell Hornets. Chelmsford Chieftains are second after beating MK Thunder 5-2 – Julius Sinkovic scored three. Romford Raiders kept their unbeaten league record intact with a 10-4 win at Solent & Gosport Devils – Juraj Huska scored four. In the NIHL South Cup Invicta Dynamos beat Romford 6-4.

EPL leaders Manchester Phoenix came from behind to win 7-5 at Slough Jets – Andy McKinney scored twice – and they completed a successful weekend with a 7-1 success at home to Bracknell Bees – Michael Psurny hit a hat-trick. Greg Chambers & Greg Owen both scored twice as Basingstoke Bison won 4-2 at Swindon Wildcats and they followed up with a 4-3 overtime success in the return on home ice – Joe Miller got the winner.

In the Challenge Cup Coventry Blaze beat Cardiff 2-1 at the Sky Dome, before twice coming from behind to win 3-2 in the reverse fixture.