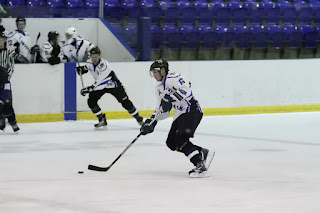 Sheffield Spartans started their NIHL1 North campaign with a 3-3 draw at Blackburn Hawks. Matt Viney, Jared Owen & Lance Derbyshire scored for the hosts, with Will Barron (left), Dan Taylor & Ollie Barron replying for the Spartans. Trafford Metros got their season under way with a 6-4 win at home to Coventry Blaze. Joe Greaves, Jason Pirie & Sean Day all scored twice for Metros.

Deeside Dragons began the season in style with a pair of comfortable wins. The NIHL2 North promotion hopefuls enjoyed a 9-0 success at Blackburn Eagles – Tom King (3) & Aaron Davies (2) led the scoring. They followed up with a 7-2 victory at home to Hull Stingrays with Davies bagging another pair. Nottingham Lions came from behind to record a 7-4 win at Fylde Flyers – Ollie Betteridge hit a hat-trick.

Romford Raiders began the defence of the NIHL1 South crown with a narrow 7-6 home win over Streatham Redskins – JJ McGrath & Matt Turner both scored two for the Raiders. Peter Jasik hit a hat-trick for Bracknell Hornets as they started with a 5-2 success at MK Thunder. Two goals from Justin Noble helped Invicta Dynamos to a 7-2 win over Thunder. Robbie Brown’s hat-trick helped Wightlink Raiders to a comfortable 10-1 win at Solent & Gosport Devils.

Billingham Stars enjoyed mixed fortunes in their challenge game double-header. On Saturday the EPL’s Sheffield Steeldogs proved too strong running out 6-0 winners, but Stars recovered impressively the following evening with a 5-1 success at Whitley Warriors – Richie Thornton scored a couple. Steeldogs travelled to face the Elite League’s Hull Stingrays on Sunday & two goals from Tom Squires helped them to an impressive 4-3 win.

Chelmsford Chieftains won the second-leg of their North v South challenge at Sutton Sting 6-0 – Gary Clarke hit a hat-trick – to claim an aggregate 19-3 victory. Chieftains followed up with a 4-3 win at home to the EPL’s Telford Tigers. Solway Sharks eased to a 12-4 success over Dumfries Legends in a game to mark the 20th anniversary of the Dumfries Ice Bowl.

Fife Flyers won the first ever Scottish Autumn Cup held at Fife Ice Arena over the weekend. Flyers reached the final with a narrow 2-1 win over Edinburgh Capitals, while Braehead Clan edged past Dundee Stars 4-2. Stars triumphed 3-2 against the Capitals to claim third place, before Jason Pitton’s four-goal haul helped Flyers secure the trophy with a 7-3 win over the Clan.

Belfast Giants warmed up to defend their Elite League title with a 4-3 overtime win over Tilburg Trappers from the Netherlands. Trappers also faced Braehead on their trip to the UK and left empty handed after a 4-1 loss. Nottingham Panthers beat Italy’s Asiago 6-3, with the highlight being netminder Craig Kowalski’s late empty netter. Coventry Blaze had a mixed warm-up week – losing 2-1 to Cardiff Devils & 3-1 to Sheffield Steelers – though Dustin Cameron’s hat-trick helped them to a 4-3 success over the Steelers in between.