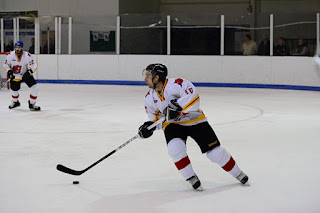 Billingham Stars won Saturday’s battle of the big two in NIHL1 North with a dominant display at Solway Sharks. Michael Bowman (2 – left), Richie Thornton (2) & Michael Elder did the damage as they ran out 5-0 winners. Stars followed up with a 9-1 success at home to Coventry Blaze – Bowman (2), Stephen Wallace (2) & James Moss (2) led the scoring.

Solway responded in style the following evening with an emphatic 7-0 win at Blackburn Hawks – Steven Moore bagged a couple. Sutton Sting won 7-4 at Sheffield Spartans – Craig Thurston scored four – and followed up with a 3-1 victory at Whitley Warriors in the Trans-Pennine East/West Trophy. Spartans bounced back with an 8-1 win at home to Trafford Metros – Nick Manning & Scott Morris both scored twice.

Nottingham Lions maintained their 100% start to the NIHL2 North season with an 8-6 win at home to Deeside Dragons – Joe Wightman scored three. Fylde Flyers beat Blackburn Eagles 9-6 – Tom Murphy weighed in with a couple – but couldn’t follow up on Sunday, losing 5-2 at Solihull Barons.

Basingstoke Bison are the new leaders of the EPL. Two goals each for Joe Rand &Joe Greener helped them to a 5-0 win at home to MK Lightning and they picked up a point in the return the following evening after a 2-1 shoot-out loss. Guildford Flames had a mixed weekend, winning 5-0 at Slough Jets – Davis Longstaff scored twice – but falling 6-5 at home to Bracknell with Shaun Thompson grabbing a hat-trick for the Bees. The win completed a four-point weekend for the Bees, who also beat Peterborough Phantoms 4-3 in overtime. Manchester Phoenix secured a pair of wins – 4-2 at Sheffield Steeldogs and 5-4 at home to Swindon Wildcats. Sheffield recovered with a 5-2 win at Peterborough – Greg Wood scored three. Telford Tigers remain pointless after falling 3-2 at Swindon.

In the Challenge Cup Belfast beat Braehead 3-2 – Greg Stewart got the winner. Tylor Michel scored twice as Sheffield won 6-3 at Hull, while Mike Wirll’s hat-trick helped Dundee Stars to a 5-3 win at Edinburgh.