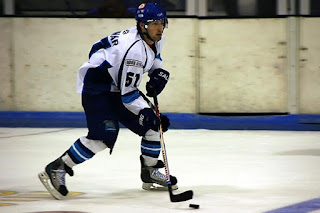 Solway Sharks moved to the top of NIHL1 North with a pair of wins. Goals from Struan Tonnar (left) & Nathan Salem helped them to a 2-1 success at home to Sheffield Spartans, and they followed up with a 4-2 victory at Whitley Warriors – Salem, Adam Reynolds, Steven Moore & Calum Henderson got the goals.

Sutton Sting came from behind to draw 5-5 at Coventry Blaze and almost shocked reigning champions Billingham Stars before settling for a 3-3 draw. Trafford Metros’ lost for the seventh time in a row – 2-1 at home to Blackburn Hawks.

Solihull Barons are up to second in NIHL2 North after beating promotion rivals Deeside Dragons 5-2 – Jake Larkin scored twice. Andy Clark hit a hat-trick for Fylde Flyers in their 4-3 win at home to Hull Stingrays.

Wightlink Raiders are the new leaders of NIHL1 South. They beat Streatham Redskins 6-2 and followed up with a 3-3 draw at Cardiff Devils. Chelmsford Chieftains won 3-2 at MK Thunder, while Invicta Dynamos lost by the same score at Bracknell Hornets. In the NIHL South Cup Chelmsford beat Slough Jets 18-1. Romford Raiders came from two behind to draw 4-4 at Invicta in the South East Trophy.

Guildford Flames crashed 6-2 at Swindon – Matias Perkkio, Aaron Nell and Hoog all scored twice – and Flames completed a bad week with a 5-4 loss at home to Sheffield Steeldogs – Greg Wood hit the overtime winner. Andre Payette scored two in the Steeldogs’ 3-1 win at home to Telford Tigers. MK Lightning took four points from their double-header against Bracknell Bees – winning 4-2 at home and 4-3 in the return.

Braehead Clan have pulled off a major signing for the Elite League, with forward Drew Miller moving to Scotland from Detroit Red Wings. Miller won the Stanley Cup with Anaheim Ducks in 2008 and has notched 77 points in 280 games in the NHL.

Robby Sandrock hit the winner for Belfast Giants as they beat Nottingham Panthers 3-2 after a shoot-out. Giants also won 4-1 at Hull Stingrays. David Ling scored three in Panthers’ 4-2 win over Cardiff Devils and they made it a four point week with a 4-2 win against Coventry Blaze. Devils beat Sheffield Steelers 2-1, but two goals from Ashley Tait helped Steelers bounce back in style with a 7-3 win over Braehead.

Tyson Marsh grabbed the winner as Cardiff won 4-3 in overtime at Coventry. Braehead won 4-1 at Edinburgh Capitals, while Dundee Stars enjoyed a pair of wins – 3-1 at Hull and 3-2 after a shoot-out at home to Edinburgh.