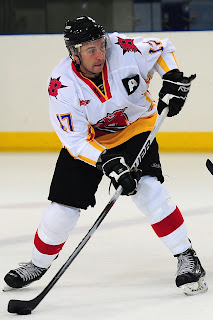 Deeside Dragons are the early leaders in Division Two after a 6-4 victory over Solihull Barons – Aaron Davies scored twice for the Dragons. Hull Stingrays picked up their first points of the season with a 3-1 win at Blackburn Eagles.

Solway Sharks warmed up for their first season in NIHL1 North, with a double-header challenge game against the EPL’s Peterborough Phantoms. Mark Gallagher’s hat-trick helped Sharks to a 6-6 draw on home ice, but Phantoms squeezed home 2-1 in the return – Luke & James Ferrara got Phantoms’ goals.

Coventry Blaze are the early pacesetters of the Elite League after a pair of wins. Blaze grabbed a 3-2 shoot-out win at Dundee Stars and followed up with a 4-3 success at home to Fife Flyers. Cardiff Devils enjoyed a three point weekend – winning 4-2 at Sheffield Steelers & losing out 4-3 after a shoot-out to the Steelers back on home ice. Nottingham Panthers eased to a 5-1 home succees over Dundee.

Belfast Giants started their Challenge Cup campaign with a 3-2 reverse at Braehead Clan. Nottingham won 4-2 at Hull Stingrays, while Fife edged past Edinburgh 2-0. The Capitals recovered the following evening beating Braehead 4-3 after overtime.