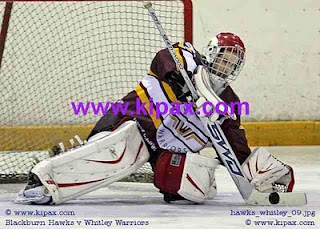 ENL Division One North Champions Whitley Warriors began their play-off campaign with a hard fought away victory over Blackburn Hawks. Adam Reynolds opened the scoring for the visitors before Aaron Davies replied for the Hawks. The home team poured forward in the final period but found Warriors’ netminder, James Flavell (above), in inspired form. With less than five minutes remaining Whitley snatched the points as Ryan Sample cracked home the winning goal. In the second group a Gareth Owen hat-trick helped Coventry Blaze ENL to a comfortable 6-3 win over Telford Titans. The following day saw a stirring battle between Nottingham Lions and Coventry which the Lions edged 3-1.

Newcastle Vipers ENL secured the Division Two title with a 3-1 victory over Lancashire Raptors. Pete Founds hit a hat-trick for Flintshire Freeze during their 5-4 win over Bradford Bulldogs to keep them in second place while Solihull Barons were awarded two points after Lancashire forfeited their fixture. Just two points separate Flintshire and Solihull but the Barons have a game in hand and appear favourites to clinch the runners-up slot and a promotion play-off against Trafford Metros.

EPL Champions MK Lightning completed the regular season with a 4-2 defeat of Basingstoke Bison and a 6-2 loss to Peterborough Phantoms. Slough Jets finished second despite a double loss to Sheffield Scimitars (4-3 & 7-2). Manchester Phoenix secured third place after a weekend of stark contrast. Saturday’s trip to Swindon Wildcats resulted in a humiliating 10-2 drubbing but they recovered in style the following day by demolishing Bracknell Bees 10-1. Adam Walker scored four to bring his tally to fifty for the season. Basingstoke ended the season in fourth place after overcoming Swindon 7-1.

The Elite League play-off quarter finals went to form as Coventry Blaze, Nottingham Panthers, Belfast Giants & Cardiff Devils made it through to the finals weekend in Nottingham. Coventry now face Cardiff while Belfast will meet Nottingham.