Technology is revolutionising sports right now. The biggest change to hit the headlines is VAR in football. Some love it, some hate it, but there’s no denying its impact when it comes to making more accurate decisions in game-changing moments.

As technology advances, ice hockey has had a similarly slow response when it comes to implementing technology that is available. Just like football, the traditionalist element comes into play. Any change can be seen by some fans as negative.

Another factor is the cost. Hooking up stadiums with the latest in tracking technology is expensive and British ice hockey is not televised and lacks NHL’s budget. Still, advanced technology will feature in the upcoming NHL season. Success across the pond could open up the doorways for greater use of technology in British ice hockey.

The NHL 2019-20 season will see some interesting changes when it comes to technology, most notably the introduction of puck and player tracking systems in all 31 NHL arenas at some point throughout the season.

The system involves a number of antenna in the rafters of the arena, four cameras for tracking, sensors in each player’s shoulder pads and specially made pucks, again with RFID chips.

This technology has many applications. For example, casinos use RFID chips to prevent theft, while warehousing companies use the tech to manage stock levels. In this case, the tracking technology monitors player’s speeds, distance travelled on the ice, passes, shot speed and more.

The hope is that fans will be able to enjoy a host of new stats, boosting the entertainment value of the sport. It’s easy to see how this tracking technology can also be utilized by coaches to review performances and implement dynamic training programs for players and for the team.

The NHL is televised regularly in the USA and has a large following generating plenty of cash, both in the stadiums and from viewers at home. The picture is different in the UK. Although British ice hockey inherently involves advanced technology, such as in the design of skates and other gear, puck and player tracking has not yet been introduced.

Nottingham IHC just took the first steps. Their home, the National Ice Centre, recently became the first stadium in the UK to install the Pixellot system, one of the most advanced of its kind in the world. The system uses multiple cameras covering the whole rink, which follow the flow of the game and shoot high definition footage.

The system is controlled by AI. It can produce fully television worthy footage, highlights reels, clips for tagging and sharing on social media and more. The cameras cover all of the action from multiple angles, as well as the off-the-puck play too.

Again, this should make the game more exciting for viewers and potentially open up more revenue streams for viewership, possibly digital. It could also benefit the coaches, who could use the footage to closely review the game and player’s performances. This technology could be rolled out in other UK ice hockey stadiums in the future. 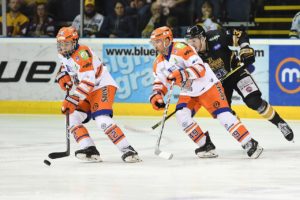 The Elite League already uses a kind of VAR review technology to upgrade or downgrade major penalties. New rules for the NHL have just made it a requirement for the referee to conduct video reviews of major and match penalties so that they can be upgraded or downgraded accordingly.

The coach of the Peterborough Phantoms has called out for greater use of technology for policing the game in the lower leagues too. He references bad behaviours, such as checks to the head and off-the-puck slashes, and believes that refs should have the ability to check over these decisions. With more fines, suspensions and bans, the behaviour in question could quickly fizzle out.

This technology could lead to fairer decisions. Indeed, it has done in football games. It also takes some of the pressure off the referee, who is currently tasked with the stress of making the right call at any given moment, each decision potentially affecting the outcome of the game.

Technology in British ice hockey is a long way behind that of the NHL, probably due in part to the lack of televised games in the UK to justify the investment of installing the technology in stadiums. At the moment, it’s down to individual stadiums and whether they want to fork out for technological upgrades. As of yet, few have.