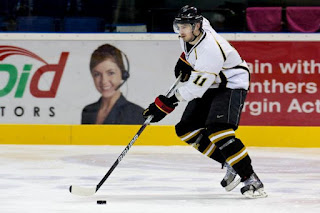 Nottingham Lions’ new captain Nick Whyatt has been released by the club. Whyatt (left) only took over the role in June, following the retirement of Chris Colegate. Lions Coach Matt Bradbury had described the appointment as being “one of the most important signings he could make” and having Whyatt back was “key for the team”, yet with just two weeks to go before the season starts, Lions have shown him the door.

After finishing first or second in the previous four years, Bradbury’s new-look Lions suffered a miserable 2011/12 campaign, eventually losing a relegation play-off to Sutton Sting to fall into Division Two for the first time. With the club expected to mount a serious promotion challenge this term, Whyatt was shocked to hear he’d been dismissed.

“I got a phone call from the GM (Danny Harrison) saying he’d had an e-mail from the Coach to call me and tell me I was being released,” said Whyatt. “Danny told me Bradbury said it was because I’d been negative at training about the lack of signings, but he wasn’t even at that session. I tried ringing him and on the fourth time he answered. He said I’d turned up to training with the wrong attitude, but I justified everything he challenged and asked why he didn’t ring me to talk to me about it, or wait until training so we could discuss it. He said he didn’t have time for that.”

Whyatt claims he’d heard Bradbury was happy the Lions were now in Division Two, as it involved less travelling and he didn’t want to get promoted again. He also stressed he sympathised with Harrison, who he felt was being put in a difficult position by doing something Bradbury didn’t have the courage to do himself.

Ex-captain Colegate slammed Bradbury’s actions, “Having captained the team for many years, I couldn’t think of a better person to take over the job,” said Colegate. “I’m appalled to hear the news wasn’t even passed to Nick by the Coach. Nick’s had more cuts and bruises in recent years than any other Lions player I played with and would always look after his younger team-mates. It’s a terrible decision, badly delivered.”