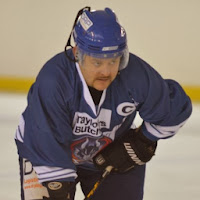 The first three players have been announced for the NIHL North All-Star weekend 2014.

Defenseman Andrews (left) boasts over a decade of senior experience, progressing from GB juniors before moving into the EPL with various Swindon teams and Solihull Kings.

He went on to play for Oxford City Stars, Swindon Wildcats and Solihull Barons in the NIHL and has also iced for Edinburgh Capitals in the Elite League. He is the current Coventry captain and has played this season for MK Lightning in the EPL.

After spells with Lancashire Raptors and Fylde Flyers, he joined Widnes in summer 2013. Caunce says his proudest hockey moment was winning the European Inline Hockey Cup with West Coast Wasps.

Slater (below) started playing hockey aged seven and was a stand-out performer in Solihull’s junior set-up. Initially he wanted to play in goal, but became a forward when his Dad said this would cost too much! 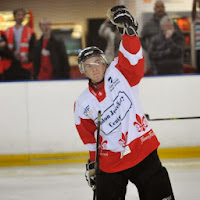 He represented the Midlands Conference U15s and was also called up to the EPL by Peterborough Phantoms in 2011/12. Slater was Barons’ leading scorer last season and is as at the top of the pile again this year to lead their challenge for the Laidler Conference title.

The NIHL North All-Star game is part of an exciting weekend of ice hockey in Deeside next summer. On Saturday 7th June Deeside Dragons face a Laidler Conference All-Star Team, while the following day they will join forces to face the Moralee Conference All-Stars.

The weekend is expected to draw a bumper crowd to North Wales and Coast to Coast will have more player announcements in the build-up to the event.