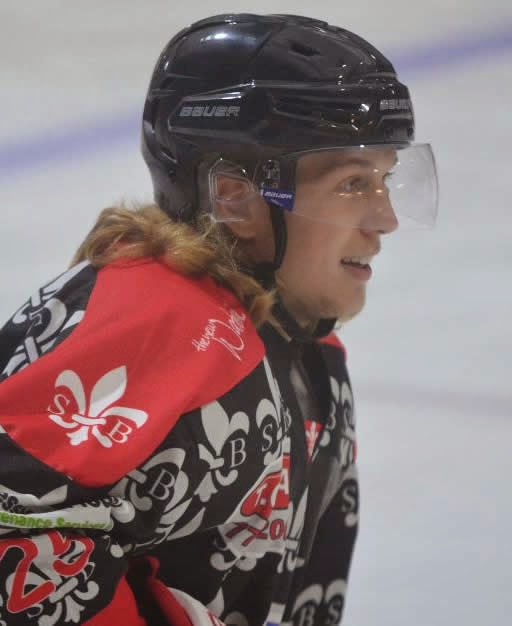 Solihull Barons first, the rest nowhere – that was the story of the NIHL North Laidler D2 regular season.

League and play-off winners in 2013/14, Barons have swept all before them again to clinch the title without dropping a point.

They are big favourites to make it back-to-back doubles, but Telford Tigers NIHL, Sheffield Senators and Widnes Wild all have other ideas.

Here’s the Coast to Coast preview for the Easter weekend showdown at Hobs Moat Road.

Solihull Barons – Never looked like losing during an impressive campaign which saw them score over 300 goals.

Joe Henry, Thomas Soar and Josh Bruce are all capable of playing at a higher level, whilst Niklas Ottosson (above) was a cherry on top of a cake that probably didn’t need any cherries adding to it. Perry Doyle and Tomas Janak are formidable figures at the back, ensuring Barons are the team to beat once again. Record against their rivals: P12 W12 D0 L0.

Telford Tigers NIHL – Their entry into NIHL caused ripples in certain quarters, but Tigers’ efforts during the season can’t be questioned. Coaches Scott McKenzie and Jason Parry assembled a youthful roster with a sprinkling of experience, and the tactic paid off with a second placed finish and promotion to Moralee D1.

James Smith and Karol Jets led Tigers’ scoring charts, whilst GB U18 stopper Denis Bell looks like a netminder with a big future ahead of him. Record against their rivals: P12 W6 D0 L6.

Sheffield Senators – Tipped by Coast to Coast at the start of the season as potential promotion contenders, Senators secured their place in the top three with games to spare. Lost three of their four games against Telford during the regular season and will need the likes of Tom Humphries, Josh Gent and Nathan Britton firing on all cylinders if they’re to reach the final.

Head Coach Andy Ellis has Senators well organised and he’ll be hopeful his team will give a good account of themselves. Record against their rivals: P12 W5 D0 L7

Widnes Wild – Built on last season’s promising debut in NIHL North to claim fourth place and a chance to win promotion via a play-off against D1 outfit Whitley Warriors. Won just once against the other three play-off contenders during the regular season, and could find Barons too hot to handle in the semi-final.

Filip Supa, Shaun Dippnall and Lee Pollitt are Wild’s main threats, but everything points to Solihull going through. Record against their rivals: P12 W1 D0 L11.

Coast to Coast’s one to watch – Niklas Ottosson: The Swede signed for Barons after winning promotion to Allsvenskan with Vita Hästen. His prolific form saw him called up to the Elite League by Coventry Blaze, but he returned to the fold to spearhead Barons’ charge to D1.

He commented: “I think we have a great chance to win another trophy. We went through the league unbeaten, so we know we can win against every team. The teams we’re playing are good as well, but if we keep up the hard work and play like we’ve been doing the whole season I do think we’ll win the play-offs.”

Barons face Wild in the first semi-final on Saturday, with Tigers meeting Senators the following day. The final is scheduled for Easter Monday.