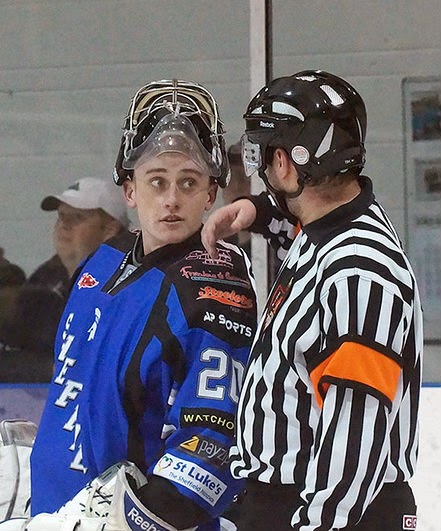 After finally winning their first-ever league title, Moralee D1 champions Blackburn Hawks are hoping to add the play-off crown to their haul in Dumfries this weekend.

Hawks completed the regular season unbeaten and are strongly fancied to secure the double, but Billingham Stars, Solway Sharks and Sheffield Spartans will all be keen to stop them in their tracks.

Here’s the Coast to Coast preview of what promises to be an exciting weekend of NIHL North action:

Blackburn Hawks – Swept to the title in impressive fashion, with Luke and Adam Brittle proving an unstoppable force throughout the campaign.

Will want to send departing Player/Coach Jared Owen out on a high, but whether his announcement proves to be an inspiration or a distraction remains to be seen as they strive to make their 25th season even more memorable. Record against their rivals: P12 W10 D2 L0.

Billingham Stars – Frustratingly inconsistent for much of the season, Stars finished strongly to secure the runners-up slot. The likes of Thomas Stuart-Dant and Chris Sykes are capable of causing most defences problems, while netminder James Flavell is one of the best in D1.

Won in Dumfries against Sharks in both league and cup, so facing the hosts on their own ice should hold no fears. Record against their rivals: P12 W6 D0 L6.

Solway Sharks – Failed to mount a serious defence of their league title and will be desperate to hold onto their play-off trophy. Like Stars they struggled to find their form for most of the season, but six wins from their last seven matches should give them confidence.

Have plenty of firepower at their disposal and looked more solid defensively at the back end of the season. Home ice proved advantageous last year and could do so again. Record against their rivals: P12 W4 D0 L8.

Sheffield Spartans – Looked on course to qualify comfortably for the play-offs during the first half of the season, but lost their way after Christmas before bouncing back to clinch fourth on the final day.

Head Coach Martin White has Spartans well-drilled and after twice coming close to beating Hawks during the regular season will be hopeful of making it third time lucky in the semi-final. Record against their rivals: P12 W2 D2 L8.

Coast to Coast’s one to watch – Brandon Stones: Spartans’ netminder (above) enjoyed an excellent second year with the Yorkshire outfit to firmly establish himself as their number one choice. Produced stunning performances in the two draws against the Hawks and will need to be in the same sort of form if Spartans are to spring a surprise.

He commented: “It’s been a tough season from start to finish, but I can honestly say we deserve to be where we are and it’s far from over yet. It’s huge for us to make play-offs and anything can happen. We’re just going to go up there and play our game, which we know is enough to turn them over and Blackburn know it too.”