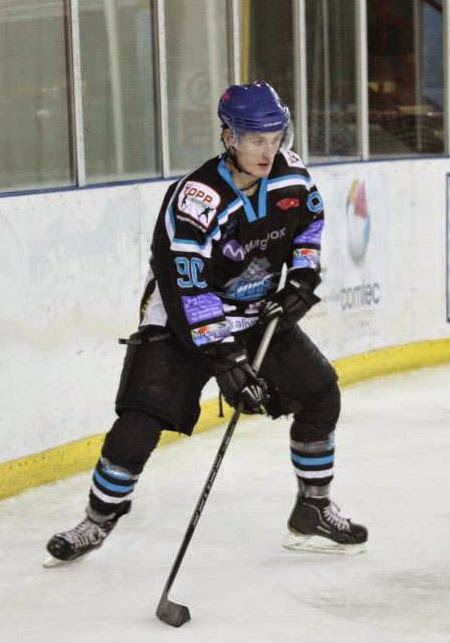 The race to reach the NIHL North Moralee D1 play-offs hots up this weekend, with four of the five teams still in contention to reach the end-of-season showdown in action.

With Stars odds-on to join Hawks in Dumfries, four other teams are in the mix for the remaining two slots.

Solway Sharks currently lie third in the league, one point ahead of Sutton Sting. Sheffield Spartans are four points behind Sting, with Whitley Warriors a further two points back but with a game in hand on the other trio.

Sharks host Sting on Saturday knowing victory would put them in pole position to secure a play-off place.

Sharks’ forward Ross Murray (above) says the game is a big one for both teams: “After a disappointing weekend that saw us only pick up two points last week, we want to put it behind us to get the ball rolling again and clinch a play-off spot.

“The game against Sutton is make or break. If we win we’re favourites for a play-off spot, but a loss puts us in a battle with Sheffield and Whitley. Having to play Whitley twice out of the four games we have left will be very tough and we can’t take anything for granted.

“All the boys agree after losing the league title to Blackburn we are determined not to give up the play-off trophy without a fight. We’ve lacked consistency this season and the ability to turn up to big games when needed. We’re looking to win our remaining four games and prepare for the defence of our play-off title.”

Sheffield Senators will claim promotion from Laidler D2 if they beat Bradford Bulldogs on Sunday. Senators triumphed 13-2 in a bad-tempered encounter with the Bulldogs last weekend and are firm favourites to join Solihull Barons and Telford Tigers NIHL in D1 next season.

The battle to finish fourth and reach the promotion/relegation play-off now looks to be down to three teams. Just two points separate Widnes Wild, Hull Jets and Deeside Dragons and all three hit the ice this weekend.

Wild are at home to Dragons on Saturday, before welcoming Blackburn Eagles to Widnes the following day. Jets travel to face the Eagles on Saturday, while Dragons clash with Barons on Sunday.