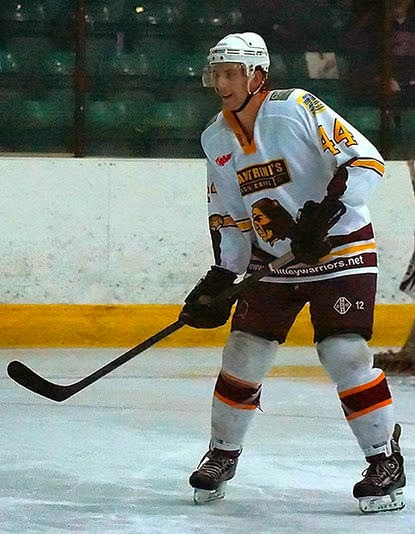 Leach steps down as Warriors’ boss at the end of the campaign and the club are desperate to finish in the top four in Moralee D1 to qualify for the Dumfries showdown.

Warriors currently stand fifth in the table, but are only two points behind Sunday’s visitors Solway Sharks who lie second.

Ace forward Adam Reynolds (left) could be back in the line-up after a long spell out with a broken ankle and he’s hoping to spark a strong end to the season.

“It’s been a frustrating three and a bit months, but I had to make sure it’s fully recovered before I came back as I can’t afford to come back early and hurt it again as I need to work too,” said Reynolds.

“I’m hoping to play on Sunday and will know more after training this week. Hopefully I can help the team achieve our goals of finishing as high as we can in the table.”

Nottingham Lions bid to boost their Laidler D2 promotion hopes on Sunday as they face Deeside Dragons. After a disappointing start to the season, Lions have won four of their last five games to move into contention and have been boosted this week by the return of defenseman Elliot Perrin.

The 20-year-old was a key figure in Lions’ D2 title winning team in 2012/13 before moving to Sheffield Senators. Head Coach Matt Bradbury commented: “It’s great to welcome Elliot back into a team that’s growing in confidence and he will be a solid, welcome addition for the second half of the season.

“He’s a Nottingham lad through and through with loads of experience, youth and energy. Elliot has always had an eye for goal as well as moving the puck with speed and accuracy and he will also be able to support younger members of the squad.

“Having spoken to Elliot he’s now got more responsibility in a new job and it really has given him a focus, as well as more manageable hours, enabling him to work and play hockey.”

Dragons head into the game full of confidence having pulled off a stirring comeback to draw 3-3 at Coventry Blaze last weekend.

Player/Coach Steve Fellows said: “We were down to the bare bones so to come away with a point was fantastic and shows how resolute we were. At 3-1 down it wasn’t looking good and we were tiring, but the lads have rallied superbly and we’ve taken a great point away.

“It’s been impossible to get out on the ice over Christmas with the ice rink being closed and it is a difficult time of year for us, so I’m regarding it as one of our best efforts this season. It took us a while to get the energy levels going but we came strong late on, so I’m delighted with everyone.”

Promotion chasers Sheffield Senators and Telford Tigers NIHL both have two games over the weekend. Senators face a home and away double header against Blackburn Eagles, with Tigers meeting Widnes Wild on Saturday before travelling to Hull Jets the following day. Jets are also in action on Saturday at Bradford Bulldogs.